The pandemic caused construction delays at its ongoing projects due to several factors such as lockdowns enforced by government agencies, work-stoppage orders, disruptions in the supply of materials and shortage of labour resulted in failure to meet development milestones. Macrotech Developers (earlier known as Lodha Developers) has said that it has availed of the Reserve Bank of India’s debt moratorium scheme following slowdown in the real estate sector due to Corona pandemic, which led to a 69 per cent fall in its sales for the first nine months of the current fiscal.

In its draft prospectus filed with the Sebi, Macrotech said following circulars issued by the RBI in relation to deferment of date of commencement of commercial operations ("DCCO”) for commercial real estate projects, it has applied to lenders for their approval to defer the DCCO for certain of its borrowings ranging from six months to two years.

The company sales fell 69 per cent due following the pandemic, to Rs 2,915 crore in the first nine months of the current fiscal, from Rs 9,273 crore during the same period of last fiscal. 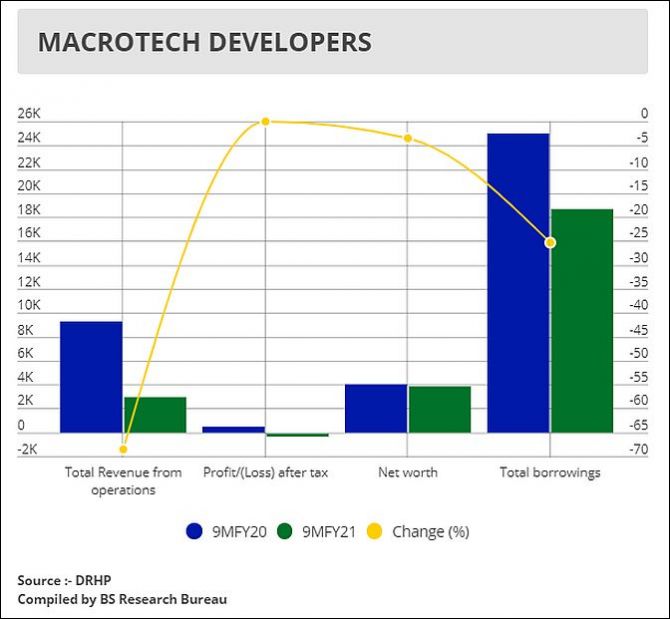 The issue proceeds will be used mainly to reduce its debt by another Rs 1,500 crore, the company said.

The company said it has restated loss for the period of Rs 264 crore for the nine months ended December 31, 2020.

"We cannot assure you that we will get such approvals in a timely manner, or at all.

"In the event, we are unable to obtain such approvals, we will be required to repay such facilities in accordance with their existing terms,” the Mumbai-focused real estate firm said.

Apart from hitting the sales, the pandemic caused construction delays at its ongoing projects due to several factors such as lockdowns enforced by government agencies, work-stoppage orders, disruptions in the supply of materials and shortage of labour, which could result in a failure to meet development milestones as well as an increase in the cost of construction, the company said.

It has now gradually resumed construction at its sites as per government directives.

The company also highlighted the risk of concentration of its entire project portfolio in the Mumbai region.

Besides, it has also planned 18 projects with an estimated developable area of 45.08 million square feet, of which 99.45 per cent projects are located in the MMR.

“In addition, as of December 31, 2020, we had land reserves of approximately 3,803 acres for future developments in the MMR region,” the company said.

On its UK projects, the company said before March 25, last year it held 75 per cent stake of Lodha Developers UK Limited and its financials were accordingly consolidated in its financial statements as a subsidiary.

"Therefore, results of operations for the nine months ended December 31, 2020 and corresponding period of the previous year are not comparable,” the company said.