With the introduction of 10 per cent tax both on long-term capital gains and on dividend, choose funds based on investment horizon and risk appetite, not on tax advantage, experts tell Sanjay Kumar Singh.
Illustration: Dominic Xavier/Rediff.com 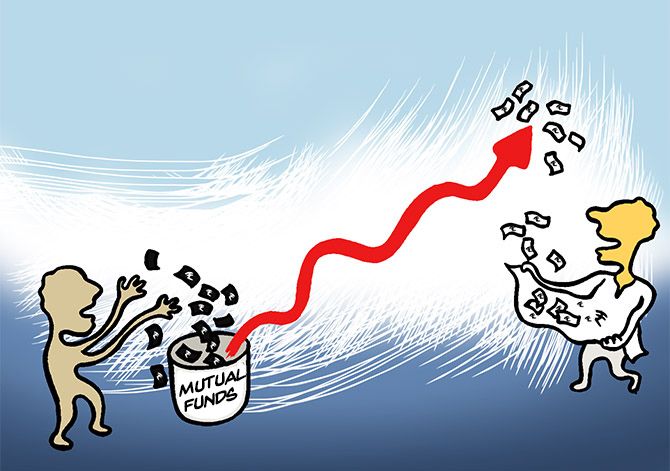 Budget 2018 has introduced two key measures that will affect investors in equity and equity-oriented mutual funds.

After these changes, make your future investment decisions based on the intrinsic merits of a product, rather than for the tax benefit.

The imposition of a 10 per cent tax on LTCG of equity funds is expected to dent investors' sentiment in the short term, as everyone loves tax-free options. But equities' long-term prospects remain intact.

The tax on LTCG will only cause a marginal dent in returns. An investor who invested Rs 1,000 per month in the systematic investment plan (SIP) of a large-cap fund for 15 years would put in Rs 180,000.

Hypothetically, if LTCG tax existed, his return would diminish to 3.15 times. "Despite the tax, equity mutual funds would still retain their position as the best asset class for the long run," says Kunal Bajaj, CEO and founder of Clearfunds.com, a Sebi-registered online investment advisor.

Under no circumstance should investors quit their equity funds in a knee-jerk reaction to this news.

Instead they need to recalibrate their plans.

"Either invest more to achieve your goals or defer your goals a little," says Vishal Dhawan, chief financial planner, Plan Ahead Wealth Advisors.

LTCG tax on equity funds will now be 10 per cent, while on debt funds it continues to be 20 per cent with indexation.

"Due to the indexation benefit, the effective tax rate on bond funds held for the long term could be lower than on equity funds," says Bajaj.

After the Budget investors should avoid choosing an asset class based on tax considerations.

Any time you book profits in equities and transfer the money to fixed income or gold, you will have to pay a tax. Hence, avoid rebalancing too frequently.

Investors will also have to plan redemptions more tactically.

"Since long-term capital gains are still exempt up to Rs 100,000 each year, avoid bulk redemption. Start redeeming two or three years ahead of your goal to benefit from this exemption," says Vidya Bala, head of research, Fundsindia.com.

You may even withdraw once in March and the next time in April to avail of this exemption for two financial years.

2. Impact of tax on dividend

Earlier, the outcome from using the dividend reinvestment option and the growth option used to be at par. Henceforth, the former will become less attractive.

"Every time dividend is declared it will be taxed at 10 per cent. This will reduce the compounding benefit from the dividend reinvestment option compared to the growth option, where you will be taxed 10 per cent only once at redemption," says Bala.

3. Move from balanced to short-term debt funds for regular income

In recent times, many investors were sold balanced funds with the promise of a regular monthly dividend. These funds are not suitable for generating income in the short term, either through dividend or redemption.

Since they have an equity exposure of 65 per cent or more, they need to be held for at least three-five years to reduce risk and deliver returns.

Investors who bought a balanced fund for regular dividend will now have to pay a tax on it. If you are a new investor who doesn't need the money, move to the growth option and stay put.

"If you need immediate income and have not been in these funds for long, move to an ultra short term or short-term debt fund and start a systematic withdrawal plan (SWP) there," says Bala.

Those who have held a balanced fund for three-five years should move to the growth option and start an SWP to avail of the benefit of exemption on LTCG up to Rs 100,000.

Arbitrage funds were used by investors for their low volatility and zero taxation after one year (whereas a comparable debt fund category like liquid fund would be taxed).

Over the past one year, arbitrage funds have given 6.23 per cent return, lower than the 6.44 per cent from liquid funds.

After 10 per cent tax on LTCG the returns from the former will only get more unattractive.

Unit-linked investment plans of insurers may attract more buyers as the Budget has not imposed any tax on them at maturity.

Players like Edelweiss Tokio Life have recently launched Ulips whose costs match those of the direct option in equity funds.

Investors should, however, bear in mind that Ulips come with a lock-in of five years.