The country's largest insurer Life Insurance Corporation (LIC) on Friday said the organisation is "very strong" and the housing finance racket involved only individual officers who will be taken care of by the CBI. 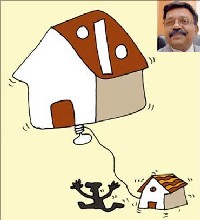 "Scam means somebody is misusing money... somebody is losing money... these are false schemes. It is proven that they (arrested by the CBI) are individuals who are charged by CBI. That (legal procedure) will take its own course", LIC chairman T S Vijayan said.

As far as departmental action against officers involved in housing racket is concerned, he said, "staff regulations are there and we will stick to them."

The CBI had arrested the CEO of LIC Housing Finance Ramachandran Nair and LIC Secretary (Investment) Naresh K Chopra besides other bankers for their involvement in the housing finance racket.

Vijayan yesterday met officials in the Prime Minister's Office (PMO) and is believed to have briefed the officials about the racket.

"It is a notional actuarial deficit in a particular scheme, overall we are very strong. We have provided Rs 46,000 crore (Rs 460 billion) in solvency margin. Appreciation in equity has been phenomenal."

Insurance Regulatory and Development Authority (IRDA) had reportedly expressed concern over the deficit of around Rs 14,000 crore (Rs 140 billion) in one account covering annuity policies that offered high assured returns though the investment yields were low.

Meanwhile, the LIC appointed V K Sharma as CEO of its housing finance arm. Sharma has been chosen to replace LIC Housing Finance CEO Ramachandran Nair, who was arrested by the CBI on Wednesday, and will take over as head of the organisation sometime next week. Sharma is currently in charge of LIC's South Zone operations.

Why I remember every frame of Mani Ratnam's films