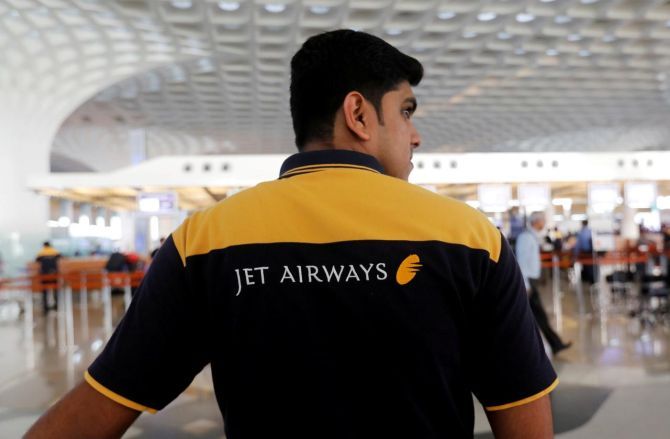 The employee union of Jet Airways, which is facing its worst crisis, on Friday sought to register FIRs against airlines' founder Naresh Goyal, chief executive Vinay Dube and SBI chairman Rajnish Kumar for non-payment of March salary, even as passengers continue to bear the brunt of last minute cancellations and missing refunds.

The airline earlier in the day, the airline said its international operations would stand suspended till April 15, after it suspended all its overseas operations on Thursday.

In the Capital, sources said the PMO has called for an urgent meeting to resolve the crisis at the airline, which is currently operating only 11 of its 123 strong fleet as lessors have grounded close to 90 planes so far since February.

This forced the airline to ground its entire operations across the Eastern and North Eastern regions since Thursday.

Earlier in the day, over 200 employees, under union president and NCP lawmaker Kiran Pawaskar, took out a march from the airport to Jet headquarters Siroya Centre, in Andheri and met senior management, though they wanted to meet Dube.

Later, they went to the police seeking to register an FIR against Goyal, Dube and Kumar, SBI is the lead lender to the airline, who are wresting the control of the airline now.

"We have to inform you that Jet has not paid our March salaries of date. We call upon you to register offences for cheating, criminal breach of trust, misappropriation of funds and other offences under relevant sections of the law," Pawaskar, who heads the All-India Jet Airways Officers & Staff Association, said in a complaint to senior inspector of the suburban Sahar police station.

Before meeting the management, Pawaskar addressed the employees and blamed the government policies for the downfall of the airline.

He also claimed that whatever the little money the airline is earning now is being used to make refunds to the passengers.

"I had a flight to New Delhi this evening, but when I reached the airport I was informed that the flight was cancelled. When I sought the refund, I was told to collect it from my travel agent," said an aggrieved passenger.

However, the employees complained that due to the last minute cancellations, they are in the line of fire of the harried passengers.