Passengers are facing delays in receiving refunds for cancelled flights and are forced to shell out 25-30 per cent more for alternate flights, following the grounding of Jet planes.

Jet is operating around 40 flights with seven aircraft for the last few days due a cash crunch.

It has cancelled all its international services till Thursday and future operations look uncertain as lenders have not released emergency funds.

The sudden massive cancellations have put travel agents and customers in jeopardy.

Agents have approached International Air Transport Association or IATA for protection of their commission and refunds while passengers are asking agents to cancel Jet tickets for later dates, given the uncertainty of operations.

When an airline cancels a flight, it offers affected passengers an alternate flight on another carrier or a refund.

These largely include passengers holding an Air France issued ticket on a Jet operated flight.

But the most impacted passengers of Jet are being offered a refund.

For example, if a passenger travelled from Mumbai to London but the return flight was cancelled by the airline, a partial refund is paid.

The refund amount in such cases is worked out on the basis of applicable fares and is credited only upon scrutiny by the airline.

“Till last week, we received refunds but now there is a doubt whether we will receive claims made from April 8,” said Rajat Bagaria, joint secretary of Travel Agents’ Federation of India.

Agents are worried whether the airline will be able to process refunds as its sales have dwindled.

A travel agent from Delhi claimed that around Rs 15 lakh refund amount is pending and he is finding difficult to pay his customers.

MakeMyTrip is issuing Jet  tickets only for three days beyond the booking date.

“We are aware of the situation and are monitoring it closely to provide meaningful customer support to ensure minimum hassle for flyers. With Jet curtailing operations, we are currently offering its flight options for travel only up to the next three days,” said a company spokesperson.

Jet, however, said there was no delay in processing refunds.

“Jet would like to clarify that your observation regarding delay in processing of partially-utilised tickets is speculative and incorrect.

"Processing of refunds, after initiation is an automated process that is governed by a centralised, global settlement system which includes the issuing bank, airline and IATA,” the airline said.

Jet said it continued its efforts to minimise guest inconvenience using its contact centre, social media and guest relations teams and refunds continue to be processed.

Meanwhile, passengers are also facing the pinch due to reduction in capacity and some are seeking cancellations of future bookings.

“We are receiving requests from our clients to cancel Jet Airways ticket of later dates because of uncertainty of operations,” said Bagaria.

“Fares on key routes like Mumbai-Delhi or to Europe have risen 25-50 per cent and this could impact travel demand in summer,” said Sanjay Narula, vice-president of Travel Agents Association of India. 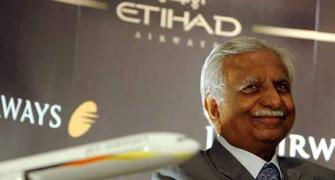