Govt to borrow 25 paise for every rupee in its kitty 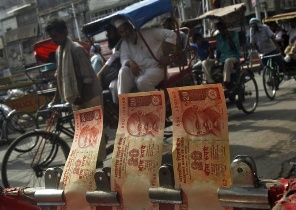 For every rupee in government kitty, as much as one-fourth will come from market borrowing in 2014-15, lower than the current fiscal ending March 31.

The government's dependence on debt has come down from 27 paise in the previous Budget to 25 paise in the coming year, reflecting ease of pressure on revenue collections.

On the expenditure side, central plan allocation has been reduced sharply from 21 paise to 10 paise in 2014-15.

Plan assistance to states and Union Territories has been more than doubled to 16 paise in 2014-15.

Defence allocation has been maintained at 10 paise.

As the single largest source of revenue income, the collection from corporate tax has been maintained at 21 paise as a percentage of every rupee earned.

However, income tax mobilisation will go up to 14 paise as compared to 12 paise in 2013-14, indicating that more individual tax payers could come under the tax net.

On indirect tax front mobilisation, excise and customs would earn 19 paise for the government while the government expects revenue collection from service tax and others to go up to 10 paise against 9 paise in 2013-14.

Despite, implementation food security laws the subsidy burden on the government has been kept intact at 12 paise for 2014-15.