'Inflation likely to moderate till September' 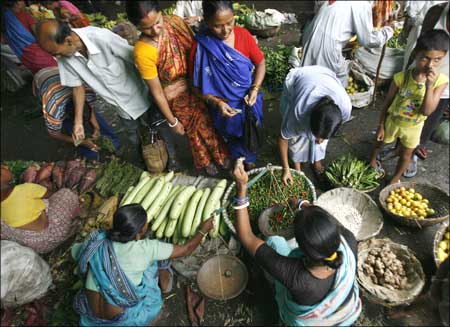 Headline inflation is expected to moderate till September this year and stay below 5 per cent, largely due to base effect, global research firm Dun and Bradstreet said in a report.

According to the Dun and Bradstreet economy forecast while subdued demand is expected to slow down the overall inflation, upside risks to overall inflation persists from depreciation of rupee and increase in global crude oil prices.

Declining for the third straight month, inflation has returned to the comfort zone of the Reserve Bank for the first time since November 2009, when it was 4.78 per cent.

"Persistent inflationary pressure which has impacted the industrial production and consumption demand has been on a downward trend since the past few months," Dun &

Singh further said that while this gives hope that the decline in inflation will aid in the recovery of the Indian economy, the underlying factors which could derail the downward momentum of the inflation cannot be undermined.

According to D&B some of the factors that would play a major role in determining the path of inflation going forward include depreciation of rupee, rise in the global crude oil prices, higher current account deficit, supply side constraints, upcoming monsoon and the implementation of the food security bill.

Singh further added that besides easing of inflation, continuation of reform process, implementation of the policy measures and thrust on infrastructure activities are crucial to propel the growth momentum of the Indian economy.
© Copyright 2022 PTI. All rights reserved. Republication or redistribution of PTI content, including by framing or similar means, is expressly prohibited without the prior written consent.