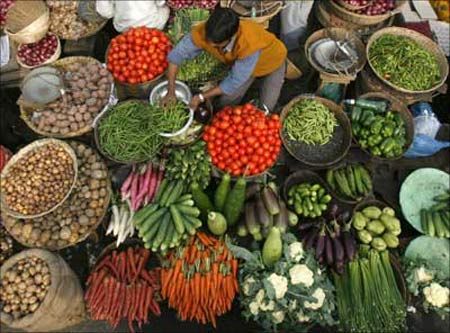 The wholesale price inflation hit a zero level in November, the lowest in about five and half years, on account of decline in prices of food, fuel and manufactured items.

As per data released by the government on Monday, the food inflation fell to nearly three year low of 0.63 per cent. Food inflation is on decline since May.

This is probably the first time when WPI inflation has hit exact zero level. The last time WPI was lower than this was (-) 0.3 per cent in July 2009.

Onion price contracted 56.28 per cent as compared to a contraction of 59.77 per cent in October. In case of vegetables, the contraction was 28.57 per cent.

However, prices of protein rich items of egg, meat and fish rose during November at 4.36 per cent, while inflation in potato stood at 34.10 per cent.

Inflation in manufactured products, like sugar, edible oils, beverages and cement, fell to 2.04 per cent in November as against 2.43 per cent in the previous month.

Prices in fuel and power segment contracted by 4.91 per cent, as against 0.43 per cent inflation in October. The sharp drop in WPI inflation, which fell for the sixth month in a row, came at the back of retail inflation declining to a record low of 4.38 per cent in November.

The decline in both retail and WPI inflation for November coupled with contraction of industrial production to 4.2 per cent in October, will put pressure on RBI to lower interest rates to boost growth.

The Reserve Bank has maintained a status quo in interest rate since January. The RBI factors in retail inflation while formulating its monetary policy.

Finance Minister Arun Jaitley too on several occasions had nudged the RBI to cut rates. The issue also figured during a debate in the Lok Sabha last week. RBI Governor Raghuram Rajan has emphasised that interest rate cut by itself would not lift the economy.

Industry has been demanding easing of interest rates to boost growth, which has slumped to 4.7 per cent in 2013-14. The economy is estimated to grow in the range of 5.4-5.9 per cent this fiscal.