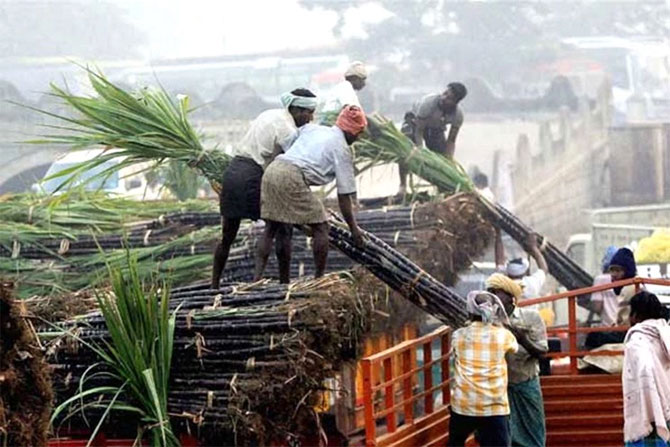 The country's sugar production has fallen sharply by 30.22 per cent to 7.79 million tonne in the first three months of current marketing year ending September, but ex-mill prices have remained stable so far, helping mills clear cane payment to farmers on time, ISMA said on Thursday.

"Since the centre has not increased the Fair and Remunerative Price (FRP) for 2019-20 as also the state governments like Uttar Pradesh, Uttarakhand and Punjab have not hiked the State Advised Price (SAP), ex-mill prices remain stable, mills are in a better position to be able to pay cane price to the farmers on time," ISMA said in a statement.

Releasing the latest production data, it said the country's total sugar production has dropped to 7.79 million tonne till December 2019 from 11.17 million tonne in the same period of the 2018-19 marketing year (October-September).

The second estimate will be released next month.

Sugar production in Maharashtra -- the country's largest sugar producing state -- dropped to 1.65 million tonne till December 2019, as against 4.45 million tonne in the same period last year, the data showed.

The average sugar recovery in Maharashtra has declined to 10 per cent from 10.5 per cent achieved in the year-ago period due to loss of sucrose content in the flood-affected sugarcane crop.

The state government has reported that one mill each in Ahmednagar and Aurangabad have shut operations due to non-availability of labour for harvesting and less availability of sugarcane, the industry body said. 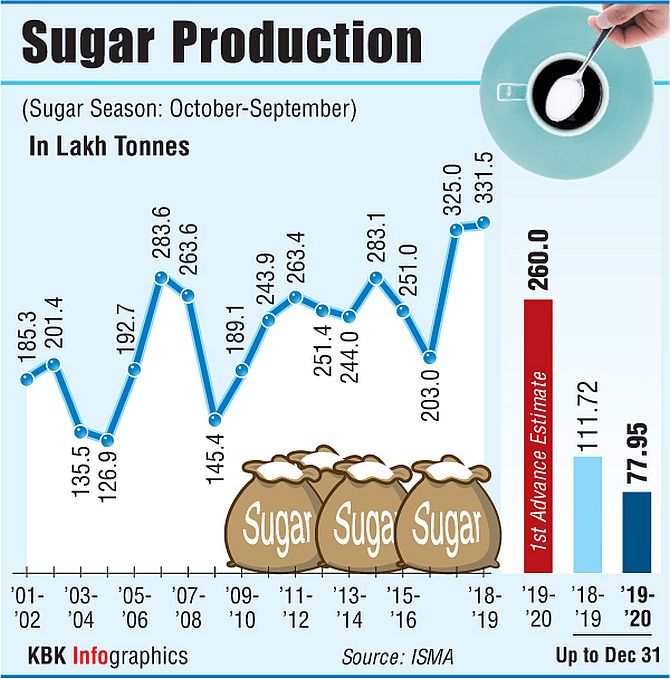 About 137 sugar mills were in operation till December 2019 as against 189 mills in the same period last year.

Whereas production in Uttar Pradesh, the country's second largest producing state, rose to 3.31 million tonne so far when compared to 3.10 million tonne a year ago.

About 119 mills were operating and average sugar recovery was 10.71 per cent so far.

About 18 to 20 sugar mills are also diverting ‘B' heavy molasses for production of ethanol.

The production in Karnataka, the country's third largest sugar producing state, declined sharply to 1.63 million tonne as against 2.10 million tonne in the said period.

On exports, the industry body said the government is in the process of reviewing actual exports made by mills against MAEQ during October-December 2019 quarter, and as already announced in the policy to reallocate the unexported quota to the sugar mills who have exported and are willing to take additional quota beyond their MAEQ.

"Reallocation of unexported MAEQ/additional allocation of quotas to the willing sugar mills will help in achieving the MAEQ target during the 2019-20 marketing year," it added.