India's medium-term growth to slow to around 6.5% after initial rebound: Fitch

The Indian economy will suffer lasting damage from the coronavirus crisis and after an initial strong rebound in FY22 (fiscal year ending March 2022) growth will slow to around 6.5 per cent a year over FY23-FY26, Fitch Ratings said on Thursday. 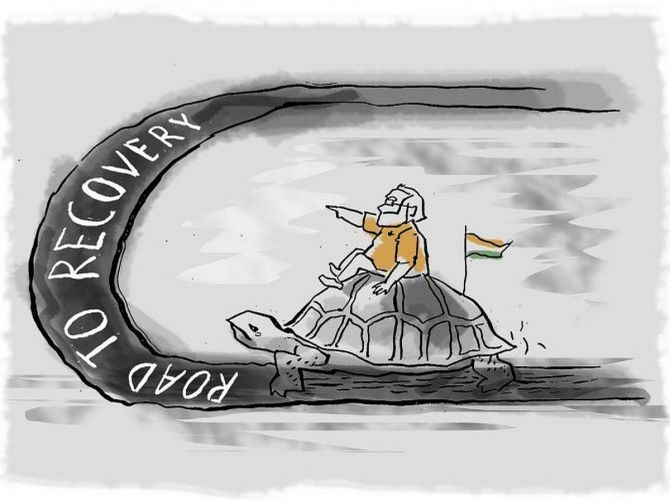 "A combination of supply-side scarring and demand-side constraints - such as the weak state of the financial sector - will keep the level of GDP well below its pre-pandemic path," it said in commentary on the Indian economy.

Fitch said India's coronavirus-induced recession has been among the most severe in the world, amid a stringent lockdown and limited direct fiscal support.

The economy is now in a recovery phase that will be further supported by the rollout of vaccines in the next months.

India's economy had been losing momentum even ahead of the shock delivered by the COVID-19 crisis.

The pandemic bought a human and an economic catastrophe for India, with nearly 1.5 lakh deaths.

Though the deaths per million are significantly lower than in Europe and the US, the economic impact had been much more severe.

GDP in April-June was 23.9 per cent below its 2019 level, indicating that nearly a quarter of the country's economic activity was wiped out by the drying up of global demand and the collapse of domestic demand that accompanied the series of strict national lockdowns.

Further, a 7.5 per cent decline in GDP in the following quarter pushed Asia's third-largest economy into an unprecedented recession.

Fitch said the medium-term recovery will be slow.

"Supply-side potential growth will be reduced by a slowdown in the rate of capital accumulation - investment has recently fallen sharply and is likely to see only a subdued recovery."

This, it said, will weigh on labour productivity, lowering its projection of supply-side potential GDP growth for the six-year period FY21 to FY26 to 5.1 per cent per annum compared to our pre-pandemic projection of 7 per cent.

"Our historical analysis of India's growth performance highlights the key role played by a high investment rate in driving growth in labour productivity and GDP per capita over the last 15 years.

“But investment has fallen sharply over the last year and the need to repair corporate balance sheets and firm closures will weigh on the pace of recovery," it said.

Constrained credit supply amid a fragile financial system is another headwind for investment.

Appetite for lending will be subdued, particularly as credit-guarantee and forbearance measures rolled out in the crisis start to be unwound.

"The economy should be able to grow somewhat faster than estimated supply-side potential over the medium term following the unprecedented downturn in FY21.

“But our projection for the medium-term recovery path - at around 6.5 per cent per annum over FY23 to FY26 - would leave GDP well below its pre-pandemic trend," it said.