India remains the highest net overweight market among emerging ones it tracks, J.P. Morgan says in a report, followed by Russia, Turkey, Thailand and Brazil. 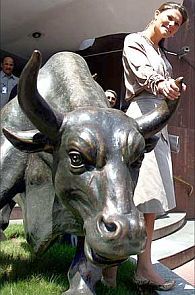 As per the investment bank's definition, an overweight market is one in which there are more funds meaningfully overweight relative to those meaningfully

Foreign institutional investors (FIIs) had been strong buyers of Indian stocks since last year until a recent streak of selling, and have turned into a big swing factor in stock market movements.

However, those strong inflows have made Indian stocks vulnerable to foreign selling, dealers warn, given concerns about the Fed monetary stimulus and about China's financial stability.

© Copyright 2020 Reuters Limited. All rights reserved. Republication or redistribution of Reuters content, including by framing or similar means, is expressly prohibited without the prior written consent of Reuters. Reuters shall not be liable for any errors or delays in the content, or for any actions taken in reliance thereon.
Related News: Thailand, Russia, Fed, Turkey, India
SHARE THIS STORY
Print this article