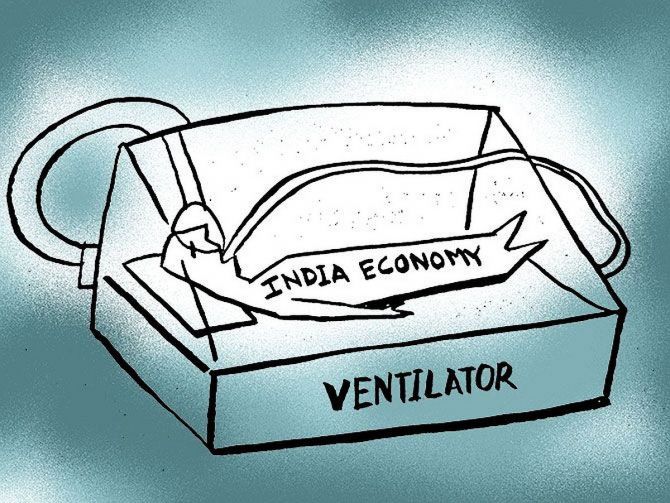 Moody's Investors Service on Friday slashed India's growth projection for the current fiscal to (-) 11.5 per cent, from (-) 4 per cent estimated earlier, saying the economic contraction would be more pronounced due to the lockdown and continued rise in coronavirus cases.

The US-based rating agency also projected India's debt burden to peak at around 90 per cent of GDP in the current fiscal and the Centre's fiscal deficit to be close to 7.5 per cent of gross domestic product.

In the previous fiscal, India's debt burden was 72 per cent of GDP, while the fiscal deficit stood at 4.6 per cent.

India's GDP contracted by 23.9 per cent year-on-year in the April-June quarter, following the economic impact of the nationwide lockdown measures, which were in place from late March until a phased lifting of restrictions began in June.

"The collapse in GDP was one of the sharpest among all major G-20 economies. We now expect real GDP to contract by 11.5 per cent in the fiscal year starting April 2020, much weaker than our previous forecast of a 4 per cent contraction," Moody's said.

It expects growth to rebound to 10.6 per cent in fiscal 2021, reflecting a strong statistical base effect from the low GDP levels of 2020 as economic activity gradually normalises.

The sharp decline in growth will result in materially weaker government revenue.

Combined with increased fiscal expenditure in response to the coronavirus outbreak, this will contribute to a wider general government fiscal deficit, which we now expect to reach 12 per cent of GDP in fiscal 2020, it said.

Moody's expects the central government and states to run fiscal deficits close to 7.5 per cent and 4.5 per cent of GDP, respectively.

This will drive a substantially higher debt burden, the agency added.

It said the economic contraction in 2020 to be more pronounced because of the lockdown and continued rise in coronavirus cases.

"As the number of daily reported coronavirus cases increases, also spreading further outside major urban centres, the possibility of renewed lockdown measures continues to present downside risk to our forecasts.

Even in the absence of renewed official restrictions outside of designated containment zones, economic uncertainties could weigh on consumer demand and investment.

"Beyond the pandemic, we see a risk that growth rebounds more gradually than in other major emerging economies, and remains below our previous expectations, held back by an increasingly impaired financial system, and limited fiscal capacity to provide support," Moody's said.

It joined the chorus of other global and domestic agencies which have projected double-digit contraction in the Indian economy.

Earlier this week, Goldman Sachs and Fitch projected India's economy to contract 14.8 per cent and 10.5 per cent, respectively, in the current fiscal.

India Ratings and Research expected contraction at 11.8 per cent.

Moody's had in June downgraded India's sovereign rating to 'Baa3' -- the lowest investment grade -- just a notch above junk status, with a negative outlook.

In its credit opinion report on the Indian government, Moody's said the country's credit profile is increasingly constrained by low growth, high debt burden and the weak financial system, and these risks have been exacerbated by the coronavirus pandemic.

"Mutually reinforcing risks from deeper stresses in the economy and financial system could lead to a more severe and prolonged erosion in fiscal strength, exerting further pressure on the credit profile," Moody's said.

These structural weaknesses may impair the economy's recovery from domestic or external shocks to a greater extent than we presently assume.

Moreover, the nature of stress among non-bank financial institutions (NBFIs) and banks is still being revealed and may prove deeper and broader than we have assessed so far, it added.

The materialisation of economic and financial system risks would be mutually reinforcing; a deeper and more prolonged credit crunch would constrain GDP growth further, which would increase pressure on financial institutions' balance sheets, the agency said.

"Should downside risks to growth or the financial system materialise, negative consequences for India's fiscal strength would follow.

“The longer the period of relatively subdued growth, the more likely that India's debt burden will continue to rise.

"And the materialisation of further contingent liabilities for the government, in the event of renewed financial support to financial institutions, would only add to the debt burden," Moody's said.

Ruling out a rating upgrade in the near future, Moody's said the outlook on India's rating could be changed to stable if economic developments and policy actions were to raise confidence that real and nominal growth will rise to sustainably higher rates than it projects.

Measures that enhance financial stability by strengthening the supervision, regulation and capitalisation of the financial sector would support such a move.

Commensurate action to halt and reverse the rise in the debt trajectory, even slowly, would also promote a stable outlook, Moody's added.