India's factory output climbed 22.4 per cent in March, benefiting from the base effect of the lockdown-marred month a year back as well as a turnaround in the manufacturing sector, while retail inflation slipped to a three-month low of 4.29 per cent in April. The high positive annual growth in the index of industrial production (IIP) in March 2021 came on back of a contraction of (-)0.9 per cent and (-)3.4 per cent in January and February 2021 respectively, according to the data released by the National Statistical Office (NSO) on Wednesday.

This turnaround was led by recovery in the mining, manufacturing and electricity sectors.

Also, it benefited from the base effect as most parts of the country were under lockdown in March 2020 and the IIP gauge had recorded a massive contraction of (-)18.7 per cent.

The CPI inflation moderated from 5.52 per cent in March 2021 to 4.29 per cent in April 2021, driven particularly by a deflation in vegetable prices of 14.2 per cent on a yearly basis which pulled down the food inflation significantly.

While cereal prices fell in line with real time data unlike in some of the previous months, some categories in the food basket such as meat and fish, edible oil, fruits and pulses continue to show high inflation both on a year-on-year and sequential basis, reflecting structural supply bottlenecks that might have got further aggravated by the fresh disruption brought in by the second COVID-19 wave.

Besides, core inflation continues to be firm due to the cost push factor triggered by higher retail fuel prices. 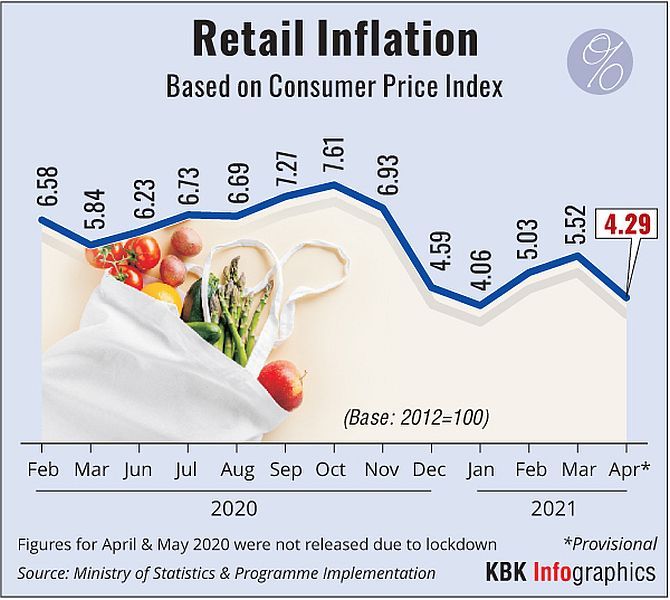 "There is clearly a risk of a further increase in retail prices due to the re-emergence of supply constraints from COVID 2.0 lockdowns but the base effect may help to moderate the inflation print even if there is a sequential uptick," said Suman Chowdhury, chief analytical officer, Acuite Ratings & Research.

At the same time, rising transportation expenses due to intermittent lockdowns and shipping rates will also add to input costs.

"Inflation is expected to sharply increase once the economy returns to the recovery path. Uncertainties have resulted in the postponement of capital spending and investment, which will translate into supply constraints in the near term. 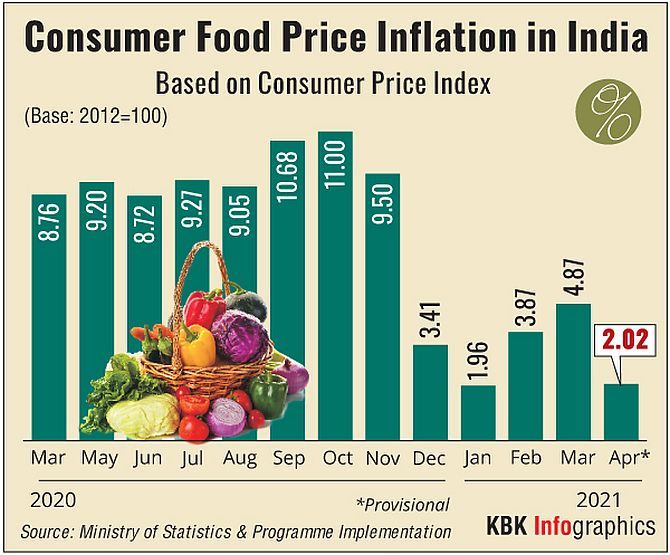 On IIP, Chowdhury said the gross generation of electricity in FY21 almost reached the levels in FY20 despite the lockdown driven disruption, implying that higher residential power demand largely offset the drop in demand from industrial and commercial activity.

"While there is a broad based uptick in manufacturing on a year-on-year basis due to the base effect, there has been a heightened activity in the export driven sectors and particularly refined petroleum products in March 2021.

"However, the sustainability of an uptrend in manufacturing is clearly in question due to the expected disruption caused by COVID 2.0 in April and May 2021.

"The YoY figures may not be meaningful to analyse at this point and we need to look closely at the sequential data," he said.

The mining sector output too grew 6.1 per cent in March, while power generation increased by 22.5 per cent.