The Indian economy has recovered 'handsomely' from the pandemic-induced disruptions, former Niti Aayog vice chairman Arvind Panagariya said on Tuesday, while expressing hope that the recovery will be sustained and the growth rate of 7 to 8 per cent will be restored. 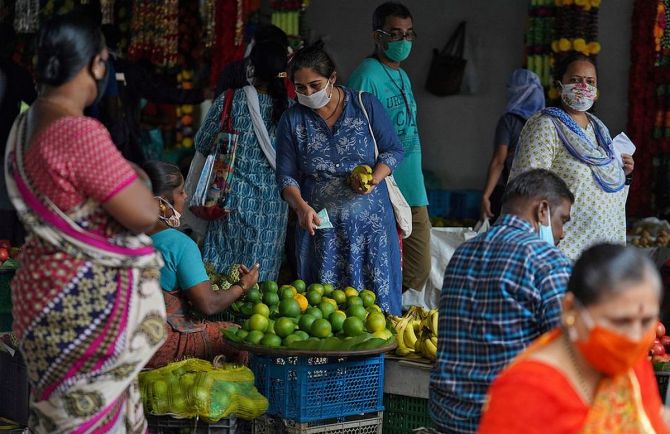 Panagariya suggested that the government must now signal its intention to wind down fiscal deficit by cutting it by half-to-one percentage point in 2022-23.

"The Indian economy has recovered handsomely, returning to its pre-COVID GDP...

"Only private consumption is still below its pre-COVID-19 level," the eminent economist told PTI in an interview.

While an advanced estimate by the ministry of statistics & programme implementation (MoSPI) places India's GDP growth in 2021-22, at 9.2 per cent, Panagariya said this is higher than any other country this past year and the recovery has also been across-the-board.

The economy, which was significantly hit by the pandemic, had contracted 7.3 per cent in the last fiscal.

Panagariya noted that the dominant view among epidemiologists now is that with a large proportion of the population now having antibodies due to past infections from different variants of the virus or vaccination, there is now a high chance that the epidemic is about to enter the endemic phase.

"If this indeed comes to pass, I expect the recovery to sustain and the 7 to 8 per cent growth to be restored," Panagariya said.

Panagariya suggested that the government must now signal its intention to wind down fiscal deficit by cutting it by half-to-one percentage point in 2022-23.

"We should not live beyond our means since it imposes a larger debt burden on the next generation," Panagariya, who is currently a Professor of Economics at the Columbia University said.

Due to the COVID-19 pandemic, the fiscal deficit ballooned to 9.5 per cent in the first pandemic year 2020-21.

The government aims to achieve a fiscal deficit of 6.8 per cent of the gross domestic product (GDP) in the current financial year (2021-22).

On rising inflationary trends, he observed that inflation is a concern in the United States, where it has reached 7 per cent, the highest in the last 40 years, but not in India. "In India, it has remained within the target range of 2 to 6 per cent," he pointed out.

Retail inflation in India rose to 5.59 per cent in December 2021, mainly due to an uptick in food prices, while the wholesale price-based inflation bucked the 4-month rising trend and eased to 13.56 per cent last month, as per latest official data.

As regards the rise in the interest rate (taper tantrum) in the US, Panagariya said they may lead to some capital outflows, but he does not expect them to be significant enough to cause a repeat of summer 2013.

"But I do hope that the RBI allows the rupee to depreciate a little further when such outflows take place," he said, adding that this will incentivize exports on the one hand and reduce the temptation on the part of the government to raise tariffs.

Taper tantrum phenomenon refers to the situation in 2013, when emerging markets witnessed capital outflows and spike in inflation after the US Federal Reserve started to put brakes on its quantitative easing programme.

Replying to a question on cryptocurrencies, Panagariya said that the government never succeeded in controlling Hawala transactions and "the same is going to be true of cryptocurrencies even if we ban them.

"So, a prudent course of action is to regulate rather than ban them," he suggested.

Panagariya stressed that it is best to create a regulatory regime for cryptocurrencies that encourages the reporting of transactions done in them rather than force them to go underground.

India is contemplating bringing a bill in Parliament to deal with the challenges posed by the unregulated cryptocurrencies.

Currently, there are no particular regulations or any ban on use of cryptocurrencies in the country.

He further noted that the RBI's proposed Central Bank Digital Currency (CBDC) is definitely an idea worth serious study and consideration.

On delay in privatisation of two public sector banks, Panagariya said he had feared that backtracking on farm laws will encourage others to resort to agitation to block reforms too.

"This seems to be clearly the case with Bank employees who are well organized," he said.

Panagariya suggested that a prudent course for the government would be to offer Voluntary Retirement Scheme (VRS) packages to those unwilling to work in the banks after privatization.

"I think the government will recover the associated expenditure in enhanced price it will receive since the buyer will then be getting only employees who are motivated to work," he said.

In the Union Budget for financial year 2021-22, the government had announced its intent to take up privatisation of two public sector banks.

Bijay Kumar Singh
© Copyright 2022 PTI. All rights reserved. Republication or redistribution of PTI content, including by framing or similar means, is expressly prohibited without the prior written consent.