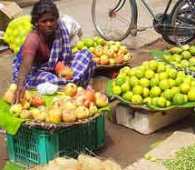 A whopping 59 million tonnes of fruits and vegetables go wasted in the country in a year due to lack of proper cold storage infrastructure, Minister of State for Food and Agriculture K V Thomas said on Tuesday.

"About 30 per cent of the fruits and vegetables grown in India get wasted annually due to lack of proper infrastructure which is a cause of concern," Thomas said.

Thomas also said that only two per cent of horticultural produce is being processed in the country now, which is way below the average in China at 15 per cent and 8 per cent for the Asia Pacific region.

"This prevents our farmers and processors from reaping benefits of growth in the horticulture sector," he added.

India has a total of 5,400 cold storages, 4,875 of which belongs to the private sector, 400 owned by co-operatives and the remaining 125 by the public sector units.

Around 50 per cent of the 5,400 cold storages are located in Uttar Pradesh, Punjab and West Bengal.