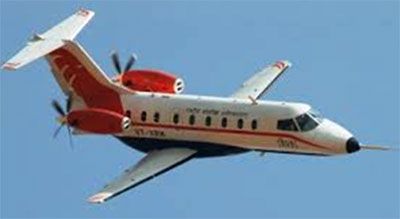 The government is expecting to connect small towns with main metros through its Regional Connectivity Scheme (RCS) by offering incentives such as relief in aviation turbine fuel, and reduced landing and parking charges for airlines to fly small planes. It will also set up a regional connectivity fund to subsidise air travel to the hinterland.

The government says it will need locally built aircraft to meet the anticipated demand so that the benefits are reaped by Indian entrepreneurs.

Union Science and Technology Minister Harsh Vardhan on Thursday said the first plan is to bring NM5 - co-developed by the National Aerospace Laboratories (NAL) with Mahindra - to India and certify it by the Directorate General of Civil Aviation. He was speaking at the Aero India show in Bengaluru.

NAL will revive its three-decade-old Saras project, which was grounded after a crash in March 2009 that killed two engineers and a pilot.

The plane has been reconfigured based on recommendations of an expert committee that investigated the crash. It will be expanded to a 19-seater configuration for civilian purposes in the next two years.

“Ground testing has already been done and in the next one-and-a-half months it will begin the official flight tests. Initially, some 25 flights have been planned,” Vardhan said.
NAL needs around Rs 400 crore (Rs 4 billion) for two prototypes that would be funded by the Indian Air Force (IAF).

“For these two limited series aircraft, we need about Rs 400-500 crore for full production. The funds for the final production will be taken care of by the Indian Air Force,” said NAL director Jitendra J Jadhav.

NAL will revive its RTA-70 passenger plane project, which it first proposed in 2007, and has asked aerospace manufacturer Pratt and Whitney to build a turbo-prop engine for the passenger aircraft. It is estimated to cost around Rs 4,000 crore (Rs 40 billion). The project will involve local players and a global partner to take it to the global market.

A feasibility study by NAL estimates around 250-300 such aircraft for India over 20 years and global demand of 7,000 planes that can complete trips of 800 km. It also could potentially replace the AN32 and HS 748 aircraft of the IAF.

NAL has transferred the technology of its two-seater Hansa, a composite light aircraft for flying training to Mesco Aerospace, to produce and market the aircraft. The plane will also be used as a platform for flight testing and experimentation of new technologies by NAL.