Indian market has been plagued by negative sentiment and triggers 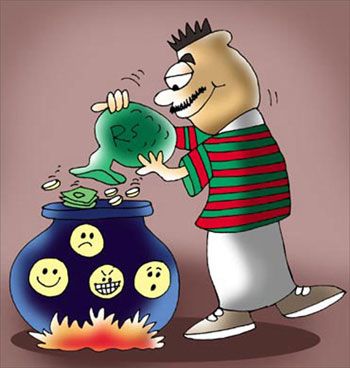 The total worth of all listed Indian companies is less than the total market capitalisation of Switzerland-listed ones. It was the reverse story at the end of the 2014, when India was at the number nine spot in global rankings. India has now dropped to number 10.

"The incremental data points are better than expected in some European countries, even as American earnings have fallen short. Dollar strengthening has started to reverse and the euro has begun to strengthen," he said.

Meanwhile, the Indian market has been plagued by negative sentiment and triggers. "The market was trading above the fundamentals. Earnings growth and reforms were not up to expectations, and the Minimum Alternate Tax issue also acted as a trigger. People are deciding to step away from the Indian markets for now. There should be support around the 7,900-8,000 mark," said Piyush Garg, chief investment officer, ICICI Securities.

"We were the most worried about the rise in crude oil and the spike in bond yields. This comes even as there are worries about the monsoon. The reasons for buying into India are less strong than earlier. People bought into India as one of the major beneficiaries of low crude prices; this is no longer as true as it was last year. Lower interest rates were also expected but yields are rising," said Nanda.

India imports most of its crude oil requirements. Lower crude translates into a more balanced budget and helps on inflation. However, crude prices have been rising due to recent strife in West Asia and North Africa. Brent crude touched $68.95 a barrel on Wednesday. 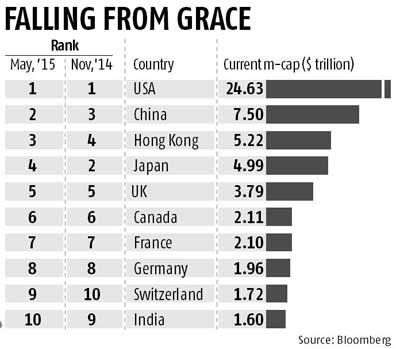 Global markets have also been hit by a round of risk aversion. "The fall has been led by developed markets. Part of it is also to do with a rout in the bond market, as well as on account of US earnings. India had been a favourite but domestic issues are being closely watched. If GST (goods and services tax) and other such reforms are passed, it would be seen as a positive," said Swapnil Pawar, investment head at Karvy Capital.

The Lok Sabha on Wednesday passed the GST Bill, which looks to create a uniform indirect tax system across the country. However, it needs to be passed in the Rajya Sabha, where the government is in a minority.

Others feel the markets are not cheap. An Emkay Global Financial Services' India strategy report dated May 5 and authored by head-institutional research Dhananjay Sinha suggested disenchantment. "In our view, even with the recent correction of eight per cent and forward multiple of 18 times one-year forward earnings, the market is still exuberant.

The exhilarated expectation from change of guard at the Centre seems to be wearing off, as earnings growth rebound has failed to materialise. While the Indian business cycle today reflects several characteristics of the 2000-2003 adjustment cycle, which preceded the 2004-2010 economic boom, the markets are already ahead of the 2007 valuations. It implies the ability of the market to price in fundamentals four-five years in advance," it said. 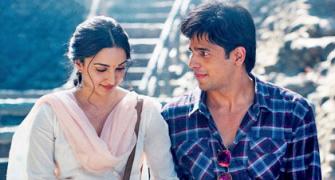