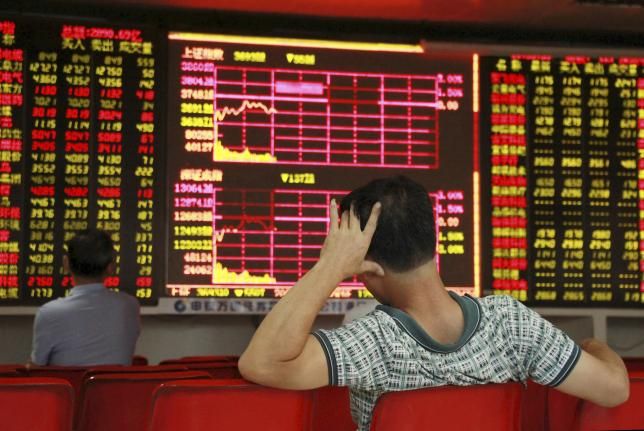 Investors look at an electronic board showing stock information at a brokerage house in Haikou, Hainan province, China. Photograph: Reuters

China's recent stock market pain is proving to be India's gain, with share prices in the south Asian nation reviving as investors who cut their holdings earlier this year switch out of Chinese equity markets and back into India's.

India's Sensex, which fell as the Shanghai Composite index  climbed between January and China's stock market rout in June, has reversed course and moved in the opposite direction to the Chinese benchmark since.

"The euphoria of the China A-shares markets on the back of the growth of margin financing was deemed unsustainable," said Ronald Chan, head of Asian equities at Manulife, which has increased its overweight position on India and cut China to neutral from overweight.

"We find India a good alternative, given its improved macro data." Investors who poured into India in 2014 pulled back this year over concerns about taxes and the slow pace of reforms, preferring markets such as China, Taiwan and South Korea.

Now, fears about Chinese stock market volatility and Beijing's interventions are overriding those concerns and driving them back to India.

India, whose exports to China were worth just $11 billion, or 0.5 per cent of gross domestic product, in fiscal 2014, is more protected from China's woes than most other Asian markets, according to Rana Gupta, Manulife's India equities specialist.

"Interest in the region at first gravitated to the booming market in China, but with the bubble there now pricked, the performance of China’s immediate Asian trading partners has suffered, too," according to Aberdeen Asset Management's Asian equities team.

"India has been relatively insulated from these developments, hence the outperformance."

The Shanghai Composite surged 60 per cent this year until a June 12 peak. Since then, it has lost 27 per cent.

The Sensex, which dropped 4.1 per cent from the beginning of 2015 until a trough that coincided with the Chinese peak, has climbed 5.9 per cent since then.

Wood credited a plan to recapitalise Indian public-sector banks, as well as steps to improve their asset quality, for CLSA's positive shift.

Government-owned lenders hold nearly 72 per cent of the country's banking sector assets. While progress is slow, such steps are helping to win investors over, apparently at China's expense.

To accommodate CLSA's bigger position in India, it has reduced its overweight in China by two per centage points, Wood said.

Two sources at an Australian fund manager, who declined to be identified or name the company, said the fund cut its Indian exposure in favour of China earlier this year and is now shifting back.

While remaining overweight in China, it has reduced its holdings on concerns about market volatility, and increased its allocation to India, they said.

The Chinese share slump and subsequent volatility, combined with Beijing's efforts to arrest it, have eroded investor confidence.

For Manulife, any increases to its China holdings would require the government to intervene less, Chan said.

Investors also want to see more evidence that the central bank's fiscal and monetary stimulus measures are working and more progress on reform of state-owned enterprises, he said. India is not without problems.

Investors remain frustrated by slow progress on land acquisition reform, the passage of a goods and services tax, and delivery of promised infrastructure, according to Aberdeen.

The discrepancy between valuations and the performance of companies is also concerning, the fund manager said.

The collective net profit of 80 Indian companies, each with a market value of more than $100 million, fell 8 per cent in the April-June quarter from a year earlier, according to Thomson Reuters data.

Analysts forecast net profit will fall 6 per cent at these firms in the current quarter.

(Reporting By Nichola Saminather; Additional reporting by Abhishek Vishnoi and Karen Rebelo in Mumbai and Michelle Chen in Hong Kong)

© Copyright 2020 Reuters Limited. All rights reserved. Republication or redistribution of Reuters content, including by framing or similar means, is expressly prohibited without the prior written consent of Reuters. Reuters shall not be liable for any errors or delays in the content, or for any actions taken in reliance thereon.
Related News: China, India, CLSA, Thomson Reuters, Manulife
SHARE THIS STORY
Print this article