Independent directors exited in droves in 2019

'There is a great deal of uncertainty, particularly with regard to fraud risk, and independent directors realise that the liabilities of taking up the post could be very high. The requirement of passing an exam will make things more onerous from here on, which is why the supply of independent directors may be impacted.' High-profile corporate frauds, accounting discrepancies, and the coming into effect of global anti-corruption laws have led to the exit of close to 1,400 independent directors last year, the highest in the past seven years for which data was analysed.

Exits in the September quarter numbered 488, the highest in the year.

According to experts, the terms of about 1,500 independent directors who had signed up for five-year tenures in 2014-15 were up for renewal last year.

Independent directors can get a second term after approval by a special resolution.

"There is a great deal of uncertainty, particularly with regard to fraud risk, and independent directors realise that the liabilities of taking up the post could be very high. The requirement of passing an exam will make things more onerous from here on, which is why the supply of independent directors may be impacted," said Shriram Subramanian, founder and managing director, InGovern Research Services.

"People are getting more and more selective about joining the boards of companies, while basing their decisions on several qualitative factors," said Tejesh Chitlangi, senior partner, IC Universal Legal.

According to him, factors such as the track record of governance, litigation history, and whether the company is professionally run or promoter/family-driven are being evaluated.

"Directors are avoiding companies driven by promoters who expect IDs (independent directors) to be yes-men. IDs are doing their homework, analysing information that is in the public domain while also seeking requisite clarification from the company concerned before signing up."

The recent change in listing regulations based on the recommendations of the Kotak Committee has also bolstered governance requirements. 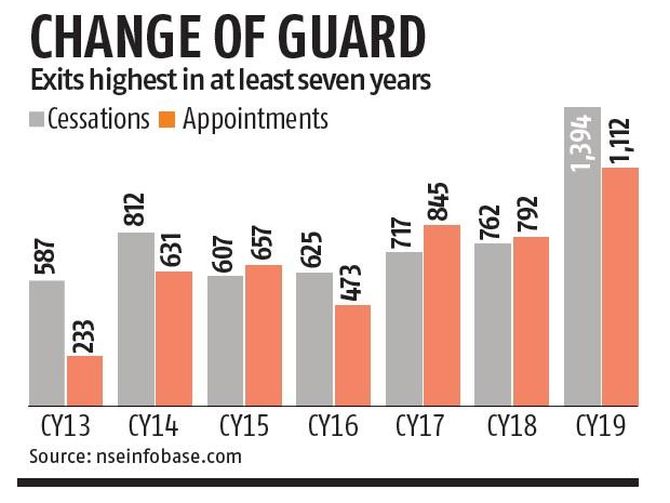 The role of independent directors in fraud detection has come under the regulators' scrutiny because they, along with auditors, are the first line of independent authorities obliged to question wrongdoing early in the day.

Independent directors carry both the legal and regulatory obligation to raise the red flag and record dissent on board matters.

"The line of business the company is in and sensitivities around it are being evaluated," said Chitlangi.

For instance, chances of lawsuits against a pharma company exporting heavily to the US are relatively high and can land the board into trouble.

Similarly, many avoid debt-ridden companies with heavy borrowings from banks.

Directors are liable to class-action suits under the Companies Act, criminal misappropriation under the Indian Penal Code (IPC), and criminal breach of trust, also under the IPC.

There could be scenarios where an independent director on the board of a wilful defaulter might get tagged -- for not showing dissent or for failing to act -- as a defaulter in his personal capacity as director.

This could result in him being declared not fit and proper to hold any significant position in a financial intermediary or carry out financial regulatory activities.