The IMF on Tuesday cut India's economic growth forecast by 0.5 percentage points to 9 per cent for the current fiscal year, with its chief economist Gita Gopinath saying that the slight downgrade is mainly due to the impact of the spread of the Omicron variant. 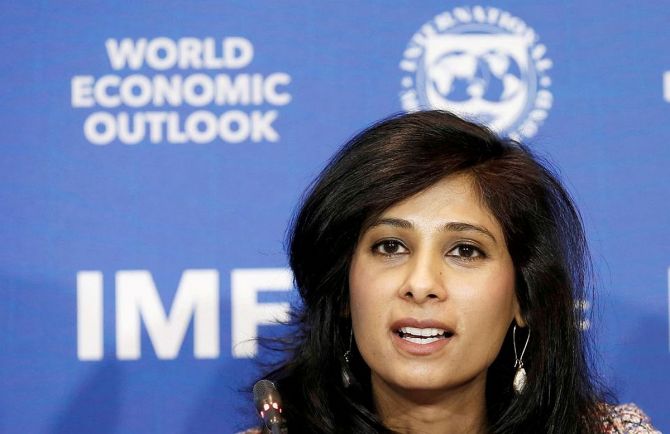 "So, growth for the previous fiscal year is now nine per cent and for this year now is at nine per cent. We moved it up slightly," Gopinath told reporters during a news conference in Washington.

In its latest update of World Economic Outlook on Tuesday, the International Monetary Fund has cut India's economic growth forecast to 9 per cent for the current fiscal year ending March 31, joining a host of agencies which have downgraded their projections on concerns over the impact of the spread of Omicron on business activity and mobility.

The Washington-based international financial institution, which had in October last year projected a 9.5 per cent GDP growth for India, put the forecast for the next fiscal FY23 (April 2022 to March 2023) at 7.1 per cent.

Responding to a question, Gopinath explained that the main reason for the downgrade for the 2021-22 fiscal comes from Omicron.

Because of this variant of the coronavirus in the first quarter of this year, there have been some localised lockdowns and restrictions in activity and mobility, she noted.

"That has an impact on the growth numbers which is why we have a slight downgrade and that postponement of the recovery is what's feeding into a slight upgrade for the following year,” Gopinath said.

According to the IMF, India's prospects for 2023 are marked up on expected improvements to credit growth and, subsequently, investment and consumption, building on better-than-anticipated performance of the financial sector.

The IMF said that global growth is expected to moderate from 5.9 in 2021 to 4.4 per cent in 2022, half a percentage point lower for 2022 than in the October WEO, largely reflecting forecast markdowns in the two largest economies -- the US and China.

A revised assumption removing the Build Back Better fiscal policy package from the baseline, earlier withdrawal of monetary accommodation, and continued supply shortages produced a downward 1.2 percentage-point revision for the United States, it said.

In China, pandemic-induced disruptions related to the zero-tolerance COVID-19 policy and protracted financial stress among property developers have induced a 0.8 percentage-point downgrade.

"Although this is 0.2 percentage point higher than in the previous forecast, the upgrade largely reflects a mechanical pickup after current drags on growth dissipate in the second half of 2022.

"The forecast is conditional on adverse health outcomes declining to low levels in most countries by end-2022, assuming vaccination rates improve worldwide and therapies become more effective," said the report.

In a blog post, Gopinath wrote that the continuing global recovery faces multiple challenges as the pandemic enters its third year.

The rapid spread of the Omicron variant has led to renewed mobility restrictions in many countries and increased labour shortages, she said.

Supply disruptions still weigh on activity and are contributing to higher inflation, adding to pressures from strong demand and elevated food and energy prices, Gopinath wrote.