If you find a bag of money on the road, don't pick it!

'Many theories are doing the rounds on how to declare unaccounted income.'
'One of the more interesting ideas I have heard,' says Harsh Roongta, 'is that the tax payer can state that he found the currency notes in a bag on the street.'
Illustration: Uttam Ghosh/Rediff.com 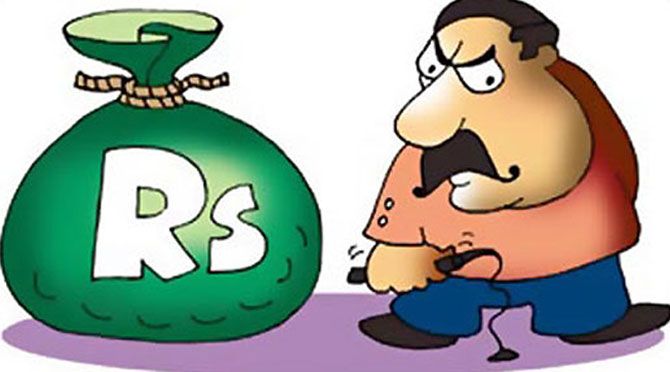 The demonetisation move has meant many people are rushing to tax consultants to see how they can come clean and declare unaccounted past income with the least of tax and penalty.

Many theories are doing the rounds on how to declare unaccounted income in the current year and pay only the regular 30 per cent tax on it, without incurring any onerous penalty or prosecution proceedings.

One of the more interesting ideas I have heard is that the tax payer can state that he found the currency notes (the ones he deposited in the bank) in a bag lying on the street.

This might not be as outlandish as it sounds. It can explain the sudden influx of currency notes without linking it to any business or profession.

This obviates the need to pay and show compliance with VAT or Service Tax regulations that may be required if the deposit is stated as income from an existing business or profession.

The idea is breathtaking in simplicity, and if plausible, constitutes an ongoing immunity scheme available to all and sundry.

As usual, I turned to Shri Googleji (after all, the all-knowing needs to be referred to respectfully) to check out this idea. What I learnt reassured me that this idea is unlikely to be used by any black money holder. Here is what I found.

In India, the duties and liabilities of the finder are specifically covered by the Indian Contract Act, 1872.

It puts many onerous responsibilities on the finder, such as the duty to return the goods to the rightful owner, duty to take the same care of the goods as he would of his own goods, duty to not mix the goods with his own goods, etc.

My understanding was that the finder's only right is to accept a reward if announced, and retain the goods for reimbursement of reasonable expenses incurred by him.

The finder can sell the goods only if the owner cannot be found after reasonable diligence.

Now, imagine that the currency deposited in the bank is sought to be explained away as money found on the street.

The income tax officer would be within his rights to ask the details of how and where the money was found, as well as the effort made by the finder to locate the true owner.

There seems no legal requirement to report the money found to the police, but I am sure any person would conclude that 'reasonable diligence to find the owner' would include reporting the matter to the police.

Every policeman worth his salt would insist the money found should be deposited with the police.

So, obviously the income tax officer will find reasonable diligence has not been exercised to find the true owner of the currency.

An honest tax officer will, therefore, conclude this is your own undisclosed income from past years and seek to recover tax and penalty on such past income by reopening the tax assessment of earlier years.

A dishonest tax officer, on the other hand, could easily leak the concocted details of your 'find' to an associate, who will then ask you for the return of 'his money' that he had lost on the day you claim to have found it.

How that associate will explain to his own tax officer the source of this money is another issue, but you can be put to lot of trouble and expense on this count.

In the end, of course, it means this route is indeed as outlandish and unworkable as it first sounds.