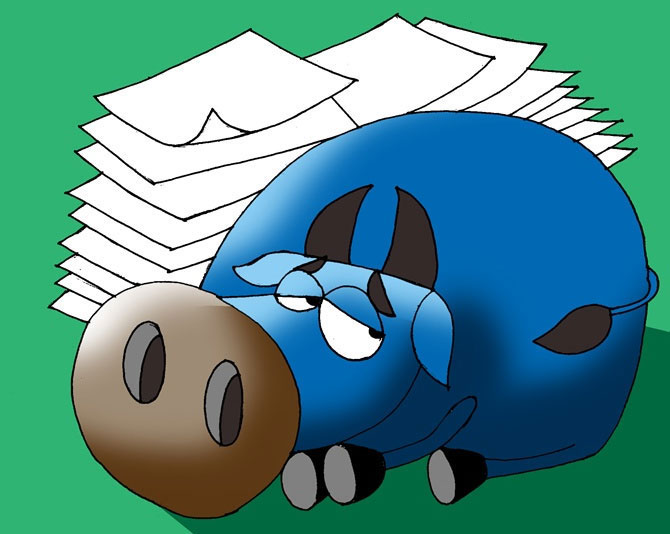 Bouncing back towards the fag-end in an otherwise choppy trade, Sensex today closed 41 points up at 28,412.89 with FMCG, healthcare and realty stocks leading the gains, tracking a mixed global trend.

Cautious stance adopted by participants, tracking mixed trend in regional markets ahead of the next week's US Federal Reserve and Bank of Japan policy meets too influenced trading sentiment.

"The investors have adopted a wait-and-watch approach to the global sentiment which is playing between cautious and optimism over the FOMC meet early next week. Currently, FII's are sellers in the market," said Vinod Nair, head of research, Geojit BNP Paribas Financial Services.

Bank stocks succumbed to profit-booking after gaining 0.77 per cent on Wednesday dragging the bankex index down 0.58 per cent.

In the broader markets, small-cap index also rose by 0.27 pc while mid-cap shed 0.25 per cent.

Key indices in Japan and South Korea dropped 0.14 per cent to 1.26 per cent, while Hong Kong moved up by 0.63 per cent. China, South Korea and Taiwan markets remained closed today.

European stocks were trading narrowly mixed ahead of monetary policy decision from the Bank of England. Indices in Germany and the UK moved up 0.10 per cent to 0.21 per cent, while France CAC was quoted lower by 0.01 per cent.

The market breadth remained positive as 1,469 stocks ended in the green while 1,260 finished lower and 197 ruled steady.

The total turnover on BSE amounted to Rs 3,801.03 crore, higher than turnover of Rs 3,616.03 crore registered during the previous trading session.