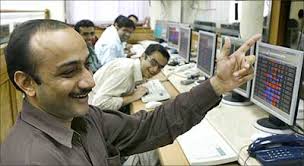 Benchmark indices closed higher for second straight session supported by broadbased rally among the frontliners on anticipation that RBI may slash the key policy rate in the upcoming monetary policy review on June 2, 2015.

In the broader market, both the BSE Midcap and Smallcap indices, ended up nearly 1% each and performed in line with the large counterparts.

Market breadth on the BSE ended firm with 1,671 advances against 1,051 declines.

According to K.Subramanyam, Co-Head Equity Advisory, Altamount Capital, "Markets going ahead is likely to be choppy. Based on an expectation of a rate cut on June 2 the market is moving up. Levels of 8,450 could be the immediate target. However it may be difficult to sustain beyond that. Profit taking could be considered at higher levels".

The rupee is quoting at 63.61 against the US dollar extending its winning streak for the fourth day on continued selling of the American currency by exporters.

Shares of Dr Reddy’s Laboratories soared over 3.5% after the drug maker announced the launch of Somazina, an innovator brand of Citicoline in the Indian market.

Bharti Airtel gained over 1.5% on BSE after the company said that it has received financing commitments of up to $2.5 billion from China Development Bank and Industrial and Commercial Bank of China.

Tata Power, Tata Steel, Bajaj Auto and ITC, SBI ended higher between 0.5-3.5% ahead of the quarterly earnings due later during the week.

However, Coal India ended 0.3% lower on caution ahead of the quarterly results due later during the week.

These three companies announced a Rs 3.13-a-litre increase in the retail price of petrol and Rs 2.71-a-litre rise in diesel prices with effect from Friday midnight to align the de-regulated domestic prices with the international rates.

Further, oil exploration majors ONGC and RIL gained 1% and 1.7% each and GAIL finished the session higher by 3%.

The stock ended the session with marginal gains. Financials and auto stocks continued their upward march on hopes that RBI Governor Raghuram Rajan will cut interest rates to revive growth.

The consumer durables surged on hopes of an uptick in demand. From this pack, Blue Star, Whirlpool, PC Jeweller, Titan and Videocon surged between 1-4%.

European shares rose on Monday, with energy stocks in focus after a rise in oil prices, while the dollar lifted off four-month lows it had reached on concern over the US economy.

Asian shares had earlier fallen as investors fretted that weak US data on Friday suggested growth was slowing in the world's largest economy, though the US S&P 500 index ended last week at a record closing high.