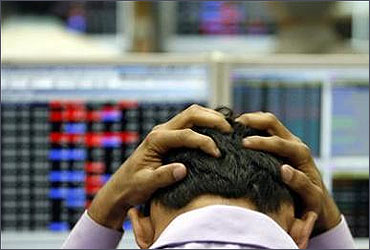 The BSE Sensex ended down 1.96 percent, marking its biggest single-day fall since June 2.

The Nifty closed 1.88 percent lower, its biggest percentage fall in a day since June 11.

The first week of the monsoon session, which commenced on July 21st, was a complete washout. On the monsoon front, the progress of the southwest monsoon is crucial for the easing of the monetary policy and would be closely followed by the central bank and the traders.

"CNX Nifty has been finding multiple hurdles near 8,650 levels from last five trading sessions and has witnessed buying interest on declines.

It needs to hold 8,500 levels to witness further up move towards 8,550-8,580 leveks. On the downside, it has immediate support near 8,480 levels and below that we may continue to witness fresh selling towards 8,440 zones," points out a morning note from Anand Rathi Research.

Tech Mahindra, Ambuja Cement, Just Dial, Torrent Pharma are set to announce their quarterly earnings for the period April-June later in the day.

Asian shares have begun the week on a plaintive note amid losses on Wall Street and worries over China, while investors brace for a Federal Reserve meeting that might take another small step toward lifting US interest rates.

China's Shanghai index slumped about 1% as the country's industrial profits declined 0.3% year-on-year in June, according to data. The Straits Times and Taiwan indices ahve also shed about 1% each.

© Copyright 2020 Reuters Limited. All rights reserved. Republication or redistribution of Reuters content, including by framing or similar means, is expressly prohibited without the prior written consent of Reuters. Reuters shall not be liable for any errors or delays in the content, or for any actions taken in reliance thereon.
Related News: MSCI, BSE, China, Anand Rathi Research, Straits Times
SHARE THIS STORY
Print this article