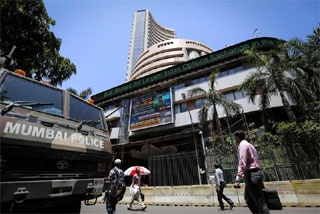 The broader markets outperformed the benchmark indices- BSE Midcap and Smallcap indices ended up by 1% each.

The rupee is trading at 63.19 against the US dollar. Sustained demand for the American currency from importers as well as its strength against other global currencies saw the rupee pinned near 13-month lows.

Chinese and US stocks headed the list of 2014 top performers while markets elsewhere ended the year on Wednesday on a cautionary note as worries about Greece's future served as an excuse to take profits.

The US dollar lost a little of the recent gains that have made it the year's star major currency, but European bonds yields scored all-time lows following a shockingly sharp fall in Spanish inflation on Tuesday.

European stocks had a steady start as they wrapped up a year that has seen a 3.5% rise for the region as a whole but also sharp divergence, with near 30% losses for debt-strained Greece and Portugal.

The stand-out global equity performer has been China, where the CSI300 index looked set to end 2014 with gains of nearly 50%.

Almost all of China's rise came in the last couple of months, as hopes for more aggressive policy stimulus to counter its economic slowdown boosted banks and brokerages.

L&T ended the session with marginal losses. The Building & Factories business of L&T Construction, a brand of L&T, has bagged orders worth Rs 2521 crore in the month of December 2014 in both the domestic & international markets, including the prestigious order for the construction of a new passenger terminal at Duqm Airport in Oman from Ministry of Transport & Communications, Sultanate of Oman.

BHEL gained 2.7%. According to media reports, the company has entered into an agreement with Hindustan Shipyard Limited and Mishra Dhatu Nigam Limited to bid for the Navy project to build six submarines.

Global crude prices declined further and analysts predicted further bearishness in the market owing to rising US production despite a global supply glut. GAIL and RIL gained between 0.2-1.2%.

Tata Steel gained around 0.8%. Tata Steel has announced that the mining restrictions the company faced in Jharhkand are likely to adversely impact its third quarter revenues as the company was compelled to suspend operations at one of its blast furnaces in Jamshedpur for more than a month resulting in below capacity operation during the period.

NTPC, Tata Power, TCS, Hindalco and Bharti Airtel were some of the notable gainer among others and gained between 1-2%.

Among other shares, low cost carrier SpiceJet dropped over 3% on the BSE after the state-run Airports Authority of India asked the company to deposit Rs 200 crore ($31.5 million) by Dec 31, failing which the airline could be put in the so-called cash-and-carry mode.

Atul Auto surged over 6% on the BSE after Goldman Sachs bought a total of 4.05 lakh shares of the company in bulk deals on BSE yesterday.

Orbit Corporation fell over 4.5% after LIC Housing Finance took possession of its property in Mumbai pursuant to a loan default by the company.

The market breadth on the BSE ended positive with 1,690 shares advancing and 1,185 shares declining.