Tata Cha has chosen Bengaluru for its first four pilots which include large format stores of 1,200 sq feet and kiosks which will be in shopping malls, IT parks and at prominent street corners. 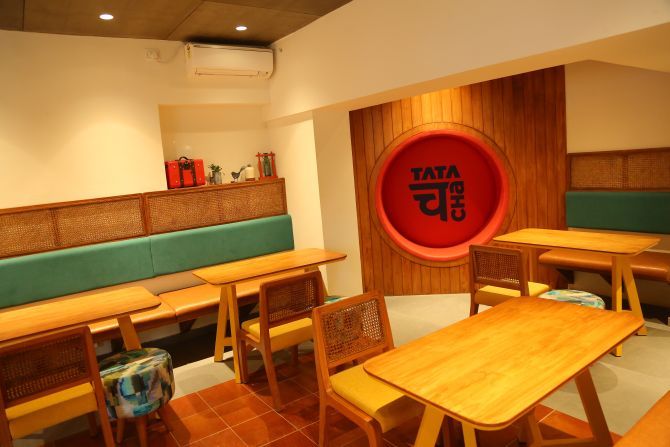 After tasting success in the retail coffee chain segment through its joint venture with Starbucks, Tata Global Beverages is brewing up a storm to make drinking tea aspirational through Tata Cha, its tea cafes targeting younger customers who spend almost 10 per cent of their expenditure on food on dining out.

Tata Cha has launched two cafes in Bengaluru and will be coming up with two more within six months as it looks to perfect the model and brews of tea before making a full-scale expansion across the country.

Even though tea has 91 per cent penetration in the Indian market and for every 100 cups of tea, India drinks just one cup of coffee, in the out-of-home environment, coffee has a more dominant position.

“We want to change that. Out-of-home dining is rising over 20 per cent and since we are tea drinking nation, we want to provide consistent boiled tea in an upscale and hygienic environment to tea drinkers,” said Sushant Dash, regional president - India, Tata Global Beverages.

Following the model of Chai Point, India’s largest chain of organised tea stores which launched the first units in Bengaluru in 2010, Tata Cha has chosen the start-up city for its first four pilots which include large format stores of 1,200 sq feet and kiosks which will be in shopping malls, IT parks and at prominent street corners.

However, the company feels it will have an edge over its rivals Chai Point and Delhi-based Chaayos, since it has far more experience in the business of tea which spans over five decades.

“Our advantage is our understanding of consumer preference,” added Dash.

Dash also feels that the tea market is huge and there’s opportunity for all the players to scale up.

Amuleek Singh Bijral of Chai Point had said that he welcomed the coming of new players in the segment.

“We are the largest players in the organised retail tea chain segment, still we only have 0.01 per cent share of the Rs 1,500-billion tea market,” Bijral had said.

Tata Global Beverages, which controls almost 21 per cent of the tea market in the country, had earlier dabbled with the idea of a tea café in 2008 with Chai Unchai, which was only restricted to tea and was replicating the corner chai tapri in a more hygienic way.

“At that point the pilot was successful but we decided to work on the global markets. Hence, the decision was to rather concentrate on ambient products,” said Dash.

Tata Cha’s new model doesn’t just focus on tea, but also snacks which tea they can munch on while they’re at the outlets.

Unlike ChaiPoint, which is also focusing on serving corporates within their offices using BoxC dispensers, Tata isn’t sure if it will go down that route yet.