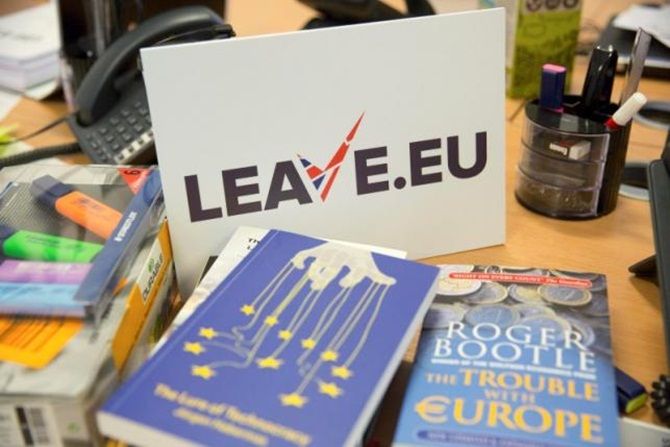 IMAGE: The process of leaving the EU could be highly disruptive, leading to short-term but intense economic pain. Photograph: Reuters

If Britons vote to take their country out of the European Union, reducing the politico-economic bloc to 27 members from 28, no corner of the global financial structure will remain unscathed.

Market horses like currencies, commodities and equities will be the first to find their courses altered, even as economic jockeys riding them -  monetary policies, bank rates and macro-economic markers - will find it hard to adapt to the altered course.

Debarghya Sanyal takes a look at Britain’s exit (Brexit) from EU, and what lies on stake.

Referendum are votes in which everyone (or nearly everyone) of voting age can take part, normally giving a ‘Yes’ or ‘No’ answer to a question.

The side which gets more than half of all votes cast is declared a winner.

All British, Irish and Commonwealth citizens over 18 who are resident in the UK, along with UK nationals living abroad who have been on the electoral register in the UK in the past 15 years.

Prime Minister David Cameron had promised to hold a referendum for Brexit if he won the 2015 general election, which he did, in response to growing calls from his own Conservative MPs and the UK Independence Party (UKIP), who argued that Britain had not had a say since 1975, when it voted to stay in the EU in a referendum.

Through January and February David Cameron had sought an agreement with other EU leaders to change the terms of Britain’s EU membership.

This deal will take effect if Britons vote for ‘stay’, and will give Britain special status within the 28-nation club.

Cameron is leading the campaign for ‘stay’ vote. The UK has been enjoying long-term economic benefits from being part of one of world’s largest free-trade zones.

The process of leaving the EU could be highly disruptive, leading to short-term but intense economic pain.

Migrant welfare payments: Cameron says cutting the amount of benefits for low paid migrant workers from EU nations will dissuade them from flocking to UK in large numbers. Migrant workers, however, will still be able to send child benefit payments back to their home country

Keeping the pound: Cameron has said Britain will never join the euro and has secured assurances that the euro zone countries will not discriminate against Britain for having a its own currency

Protection for London’s biz: Safeguards for Britain’s large financial services industry to prevent euro zone regulations being imposed on it

Running its own affairs: For the first time, there will be a clear commitment that Britain is not part of a move towards ‘ever closer union’ with other EU member states - one of the core principles of the EU

Britain’s exit from EU will have major repercussions for Britain, EU as well as economies across the world.

Increased paperwork: EU citizens in Britain and Brits living in other EU nations would have to update their immigration statuses. Companies operating in both the UK and the EU would have to verify that they’re compliant with two sets of laws.

Blow to UK economy: The UK government estimates say that Brexit could cause the country’s economy to be between 3.8 and 7.5 per cent smaller by 2030

Ripple effect for global economy: The United States will bear the major brunt of a Brexit being UK’s biggest trading partner.

President Obama has warned that it could take 10 years for Britain to negotiate a new trade deal with the US Goldman Sachs, JP Morgan, Morgan Stanley and Citigroup together have contributed to the anti-Brexit campaign.

The Indian angle: With EU losing one of its members, India too can feel singed

This will increase petrol and diesel prices to an extent

The government then may want to reduce additional excise duty imposed on fuel when it was on a downward trajectory. This will increase fiscal deficit, unless revenue increased

Prices of gold, electronic goods, among others will increase

Cheaper rupee will make Indian exports, including IT and ITeS, competitive