Holy cow! Cattle to get own Aadhaar cards 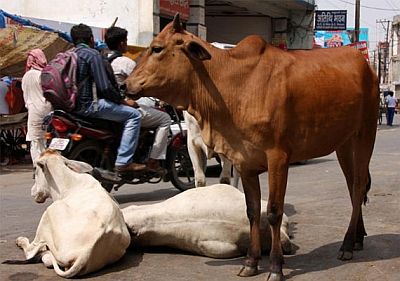 The government surely knows how to milk the Aadhaar card for ideas.

The animal husbandry department is set to launch a massive programme to tag all indigenous variety of cattle in a bid to improve progeny and milk production.

There are about 85 million milch cows -- those that produce milk -- in the country.

They could all soon have their own Aadhaar-like identification cards. The ID cards will have all relevant information about the breed.

This, in turn, will enable improved progeny and assist in augmenting milk yields.

The government wants to double the country’s milk production by 2020.

The stated objective of the programme is to help small and poor farmers, who own 70 per cent of the indigenous cow varieties.

If it is successful, the project could help them double their incomes with improved milk production.

However, the political context of the initiative and the emotion attached to cows cannot be ignored.

However, their milk yield per animal is only around 1-2 litres a day, while cross-bred and hybrid varieties give much more.

“Our objective is to improve the per-animal milk yield of indigenous cow varieties from two litres to at least five litres a day, so that the annual income of small and poor farmers, most of whom own desi varieties, improves,” Devendra Chaudhury, animal husbandry secretary, told Business Standard.

The tagged cows would also have their own health cards, containing details on milk yields, any disease suffered, and other general health information.

“We have completed the inter-ministerial discussion on the issue and could soon float a Cabinet note on it,” Chaudhury said.

Both the ID card and the health card scheme will be operationalised with the help of state governments. In the first phase, about 85 per cent of the milch cows will be tagged.

State governments will be provided funds for undertaking the programme. At present, just around 0.8 to 1 million cattle is tagged are India.

Chaudhury said by 2020, India’s production of milk from cross-bred cows and buffaloes will rise in their natural course, while for indigenous cows the growth will come through breeding of improved varieties.

Of the 14 states with large populations of cows, the maximum growth is expected to come from Uttar Pradesh and Madhya Pradesh, which also have the largest number of cattle in the country.