Hindujas are only Britons in world's richest billionaires list 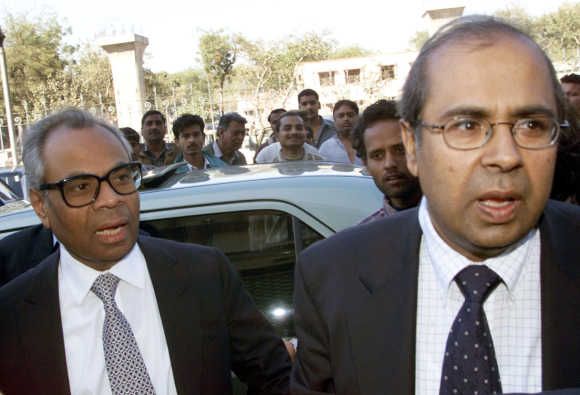 With an estimated wealth of nearly 14 billion dollars, India-born Hinduja brothers have now emerged as the only British names on the list of world's top 80 billionaires dominated by Americans.

Srichand and Gopichand Hinduja emerged as the 66th richest in the world, as part of an Oxfam study released here at the World Economic Forum (WEF).

The figures, based on the definitive rich list compiled by 'Forbes' in March 2014 and the data from investment bank Credit Suisse indicates that the London-based entrepreneurs are now the richest Britons in the world.

Their UK-headquartered Hinduja Group conglomerate has worldwide interests that range from automobiles and banking to real estate and IT.

The Hinduja brothers had emerged as the richest in Britain in the annual 'Sunday Times Rich List' last year.

The next wealthiest Briton in the Oxfam analysis comes in only at 94 in the world –- Gerald Grosvenor, the sixth Duke of Westminster and godfather to Prince William –- who is worth an estimated 12 billion dollars.

"In 2010, the richest 80 people in the world had a net wealth of 1.3 trillion dollars. By 2014, the 80 people who top the 'Forbes' rich list had a collective wealth of 1.9 trillion dollars; an increase of 600 billion dollars in just four years, or 50 per cent in nominal terms," the Oxfam report titled 'Wealth: Having It All and Wanting More' says.

"This unprecedented growth of wealth by the rich means the 1 per cent of the richest people in the world now own 48 per cent of all global wealth (as of second half 2014), resulting in just 52 per cent left to be shared between the other 99 per cent of us," it says.

The study says that wealthy individuals have generated and sustained their riches through interests and activities in a few important economic sectors like the financial and insurance sectors -- the most commonly cited source of wealth for billionaires on this list.

Oxfam has called on world leaders, including those gathered at the 2015 World Economic Forum Annual Meeting here, to address the factors that have led to the current inequality explosion.