Gujarat has become the global gateway to India: Modi 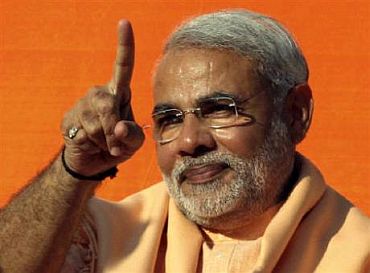 Terming Gujarat as "global gateway to India" Chief Minister Narendra Modi on Friday asked captains of industry to utilise the Vibrant Gujarat Summit as a platform to send a "positive" message to the world to stay away from "exploitative" economic models.

"Once upon a time, Gujarat was the gateway to the globe from India. Now it is becoming the global gateway to India. We will make such a Gujarat that whole world will make it their home," Modi said addressing the inaugural session of VGS 2013.

Addressing a galaxy of global, national and local industrial leaders, he also promised to take the state's success story a step further.

"Gujarat is a state in India which has now completed its first phase of development. Now we are ushering in the second phase; a more robust, a more dynamic and more modernised Gujarat," he said.

Talking about the past few tumultuous years of economic slowdown and its impact worldwide, Modi said, "we are meeting at a very crucial stage of our social and economic life. Last few years have not been very encouraging for the global

economy. Even the fastest growing economies of the world have experienced a slowdown. This situation has impacted India also and the growth of our economy has slowed down recently."

"It will be a great service to the global community if this forum and platform can display and demonstrate the conviction and commitment for betterment of economy and betterment of the lives affected. From here we must send a positive message for the global economy," he said.

"Even exploitation of markets is not going to help unless the people living in those markets are empowered, unless the local capacities to produce are improved, unless people are made partners in progress," he said.

"In Gujarat, we have created a model which makes use of the local resources and local talent. At the same time, it offers solutions which are right and relevant in the global perspective," Modi added.

Earlier, Modi today came in for fulsome praise from India Inc with RIL chairman Mukesh Ambani hailing him as a leader with "grand vision" and his younger brother Anil Ambani of ADAG putting him in the league of Mahatma Gandhi and Sardar Patel.

"In Narendra Bhai, we have a leader with a grand vision...Gujarat has been a pioneer state in infrastructure giving it an innate advantage," Mukesh Ambani said at the summit.

The three-day grand event aimed at investment promotion and creating investor friendly climate is being attended by top Indian industrialists and representatives of foreign companies and a battery of envoys.