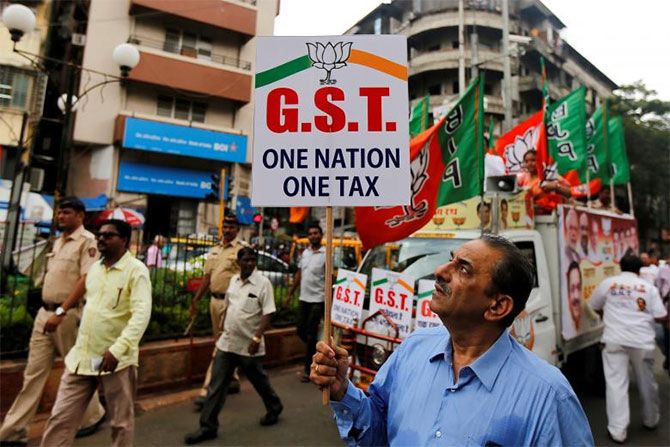 It was clear by the end of August that the government had rushed into the goods and services tax (GST) regime without adequate preparation.

"In any large tax reform, unforeseen difficulties may arise," said Sumit Dutt Majumdar, former chairman of the Central Board of Excise and Customs.

"But the problems we have today are not unforeseen."

The GSTN (Goods and Services Tax Network) had shut down on August 30 and 31.

Beginning September, taxpayers started filing returns for outward supplies for July in form GSTR-1. As their problems had not been sorted out, the government extended the last date for filing GSTR-1, 2 and 3 returns for July to September 10, 25, and 30, respectively.

But taxpayers continued to face difficulties and delays even as their frustration mounted because they could not file returns. But the government was in denial mode.

Prime Minister Narendra Modi said apprehensions with regard to the GST regime had proved unfounded and a smooth transition had happened.

Finance Minister Arun Jaitley made the same claims and said that Rs 92,283 crore GST had been collected in July against a target of Rs 91,000 crore.

Government officials chided the trade for filing returns on the last day, failing to appreciate that it was the government itself that had prescribed the last date and failed to enable taxpayers to file returns.

The new interim chief of the GSTN denied reports that the GST portal had crashed. Figures were thrown around to show that all was well, ignoring the stressful experience of the GSTN users.

The state finance ministers, however, refused to be taken in by propaganda as disturbing facts continued to emerge.

In the transitional credit form GST-TRAN-01, filed by taxpayers along with their maiden returns for July, businesses had claimed credit of more than Rs 65,000 crore for the excise, service tax and value-added tax paid before the GST roll-out.

The GST Council could understand that it had been misled on the readiness of the GSTN to cope with the work load. A fresh look was necessary.

So, the Council decided to allow amendments to GST-TRAN-01 returns and extend the last date for filing the July GSTR-1, 2 and 3 returns to October 10, 31, and November 10, respectively.

For August and subsequent months, it decided not to give any deadlines for filing returns. However, it maintained the last date of paying taxes on the basis of summary returns in form GSTR-3B by the 20th of the next month till December.

This means that exporters, who had been promised tax refund within seven days, have to now wait for almost four months. So, the Council decided to appoint a Group of Ministers (GoM) to look at the GSTN issues and a panel of bureaucrats to have a fresh look at the problems of exporters.

The GST Council's honest appraisal and willingness to recognise the ground realities and act expeditiously eased the immediate pressure.

The GoM, led by Bihar Deputy Chief Minister Sushil Modi, got off to a quick start, meeting the top executives of Infosys, the vendor of the GSTN platform.

"It is like building the ship while sailing," said Modi, summing up the challenges. It asked Infosys to fix the glitches by October end.

The GSTN executives met several large enterprises including Unilever, and more than 80 tax officials in various states, and interacted with tax consultants who help the nearly 8.5 million taxpayers registered with the indirect tax system to file returns.

The worry now is that the GoM is merely looking at pushing the GSTN and not the processes.

Shailendra Kumar of taxindiaonline.com says that it would be unfair to blame just the GSTN when the flaw lies in the design of the business processes.

"GSTR-1, 2 & 3 are all very large containers of information. Their designs ignore the ground realities and shift the burden on the GSTN," he says.

Pratik Jain of PwC says: "Suspend the process of matching inward and outward invoices till the system stabilises. Give staggered time schedules for different classes of taxpayers. Simplify the returns for small taxpayers and those filing 'nil' returns.

"Allow transfer of cash balance from one state to another. Have a common CGST pool, instead of state-wise."

Dutt Majumdar says: "Give exemptions to small dealers with the threshold of Rs 20 lakh even for inter-state sales or supplies through e-commerce. Take away tax on the reverse charge mechanism on supplies by unregistered dealers. There is no need for e-way bills."

Sushil Modi should, therefore, take a holistic look rather than merely egging on Infosys. A hurried job will cause more pain later.