The GST Council on Friday left taxes on COVID-19 vaccines and medical supplies unchanged after the BJP- and Opposition-ruled states sparred over whether tax cut benefits will reach the common man. 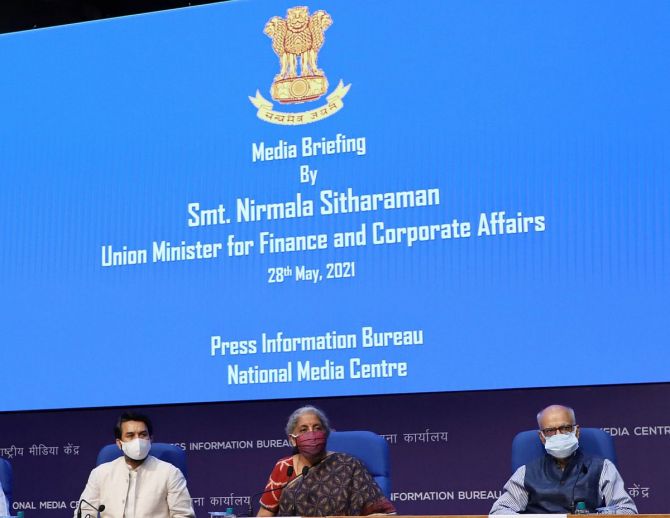 Congress and other Opposition ruled states have been demanding a reduction in taxes but the central government felt the move may not result in tangible gains for people.

"It is one thing to rush to say - do this, it will benefit the common man. But when the technical, fitment and law committees go into the details, you realise that that could have collateral impact on many others," Finance Minister Nirmala Sitharaman said.

"I am not talking about the revenue generation aspect, but how many other items will get included in it as a result of which how you are going to implement it," she added.

Briefing reporters after the 43rd meeting of the GST Council, the finance minister said a ministerial panel will be constituted to decide on the rates on the vaccines and medical supplies.

The panel will submit its report by June 8.

"When actually these benefits, because they are going to manufacturers or intermediaries, (will) be passed over to the end user, the patients, on that there were different views.

"And therefore I suggested that a GoM (Group of Ministers) go into details and take a call. As a Council, we are responsible to see how it reaches the common man... the GoM will come back to us and we will take a final call," Sitharaman said.

Currently, 5 per cent GST is levied on domestically manufactured vaccines, while it is 12 per cent for COVID drugs and oxygen concentrators.

"The interest of the Centre and all states/UTs is to ensure that Indians get vaccinated in time and that states get due share of revenue in time, a balanced view is maintained, as witnessed in today's meeting," Sitharaman said.

She added that import of Amphotericin-B -- a medicine used for treatment of black fungus -- would be exempted from the Goods and Services Tax (GST).

The Council also decided that import of COVID-related goods such as medical oxygen and vaccines will be exempted from GST till August 31, even if they are imported on payment basis or free of cost for donating to the government or a state-approved agency.

The Council also decided that the Centre will borrow Rs 1.58 lakh crore and pass it on to the states as back-to-back loans to make up for the shortfall in their revenues from the implementation of the GST.

"On compensation cess, the same formula as last year will be adopted this year too.

"Rough estimate is that Centre would have to borrow Rs 1.58 lakh crore and pass it on as back-to-back loans to the states," Sitharaman said.

A special session of the Council will be held soon to consider extending the five-year GST shortfall compensation period to states beyond 2022.

The Council provided relief to small GST taxpayers through an amnesty scheme for late return filers.

To provide relief to taxpayers, late fee for non-furnishing of GSTR-3B for July 2017 to April 2021 has been capped at Rs 500 per return for those taxpayers who did not have any tax liability.

For those with tax liability, a maximum Rs 1,000 per return late fees would be charged, provided such returns are filed by August 31.

Besides, filing of annual returns for 2020-21 fiscal for taxpayers with aggregate turnover of up to Rs 2 crore has been made optional.

Meanwhile, Punjab Finance Minister Manpreet Singh Badal tweeted that GST COVID-19 relief was put on hold due to "lack of compassion" by the Centre.