News
Business
Movies
Sports
Cricket
Get Ahead
Money Tips
Shopping
Sign in  |  Create a Rediffmail account
Rediff.com  » Business » Jaitley on why GST bills must be passed this Parliament session

Jaitley on why GST bills must be passed this Parliament session

These have to be passed in this session to meet the September 15 deadline for switching over to the new indirect tax regime, Jaitley said. 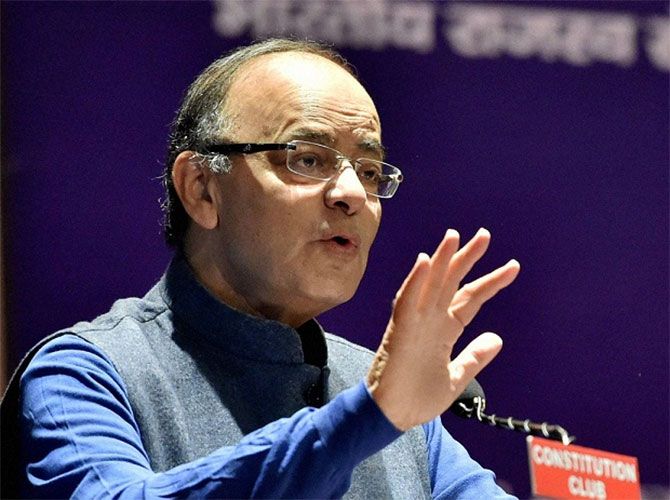 The government on Thursday emphasised the urgency to pass the GST laws during the current session of Parliament, saying the Centre and the states would otherwise lose their right to collect indirect taxes after September 15.

Finance Minister Arun Jaitley said in the Rajya Sabha that the government is keen to roll out the GST on July 1 and other aspects like bringing petroleum and land under its ambit will be considered after the first year of implementation of the new system of indirect tax collection.

Replying to a debate on the Bugdet which was approved by the House later, he said four bills supporting the Constitution amendment law on GST enacted last year will be introduced in the Lok Sabha shortly.

These have to be passed in this session to meet the September 15 deadline for switching over to the new indirect tax regime, Jaitley said. The ongoing Budget session ends on April 12.

He said the GST Constitutional Amendment Bill does not provide for extension of the deadline beyond September 15 this year for transition to GST regime.

If Goods and Services Tax (GST) is not implemented by September 15, the government's legal entitlement for collection of taxes will.

The Cabinet on Monday cleared the four GST related bills to enable roll out of the Goods and Services Tax from July 1.

Jaitley said nine bye-laws have to be framed, of which four have been approved and hopefully the remaining five would be approved by March 31.

The Constitutional Amendment Bill for roll out of GST was notified on September 16, 2016 and it provides for one year to switch-over to the new indirect tax regime.

"So after September 15 this year, the legal entitlement for collection of taxes will end. So the alternative system has to come in place before September 15," Jaitley said.

On petroleum products and alcohol, the finance minister said these will come under GST once the states and the GST Council arrive at a consensus on the rates to be imposed.

He said these are a part of GST "but till all the states, the GST Council agree, we won't start imposing tax on these".

Till then, the states will continue to impose their own taxes.

On land aspect, Jaitley said the chief economic advisor and the Delhi government have favoured its inclusion in the GST because there is "enormous use of black money in it".

This view, he said, has "logic" and therefore the GST Council decided that these aspects will be considered after one year of GST implementation.

With regard to the marine areas, he said there is a dispute over revenue jurisdiction between the Centre and the states. While the seas come under the purview of the central government, the revenues are collected by the states, Jaitley said, and questioned how logical it was.

The minister said in the all-powerful GST Council, all decisions were taken by consensus and there was no voting. He also said the Central and State governments did not take any stand on political lines but on federal lines and taxation lines.

Jaitley also said that at some point there may be a need for "federal bureaucracy of taxation" under the GST.

He added that a ministerial group is looking into ways to remove bottlenecks on tolls which impede smooth flow of goods and services.