This amount will include Rs 13,100 crore that Economic Affairs Secretary Subhash Garg has been publicly seeking from the central bank’s contingency reserve fund since 2017-18 (FY18). The Narendra Modi-led central government is seeking at least Rs 23,100 crore in interim dividend from the Reserve Bank of India before March 31, as it looks to meet an increasingly difficult fiscal deficit target of 3.3 per cent of the gross domestic product for 2018-19 (FY19).

This will include Rs 13,100 crore that Economic Affairs Secretary Subhash Garg has been publicly seeking from the central bank’s contingency reserve fund since 2017-18 (FY18), officials told Business Standard.

Last month Garg said the government will ask the central bank for an interim dividend, just a day after Finance Minister Arun Jaitley ruled out the Modi administration needing RBI's money to bridge any fiscal gap.

On March 27, last year, just three days before the end of FY18, the RBI transferred Rs 10,000 crore as interim dividend. The government is seeking a similar amount plus the pending demand from contingency reserves, an official said.

For FY19, officials admit that there could be a combined shortfall of Rs 70,000 crore- 1 trillion on goods and services tax (GST). However, the Centre's own GST shortfall may not be more than Rs 30,000 crore. This would be partly balanced by the direct tax and disinvestment budgeted targets being exceeded.

But there is expected to be additional outlay in almost all subsidy heads and on social sector schemes.

There remains a concern on direct taxes as well. Central Board of Direct Taxes Chairman Sushil Chandra has cautioned officials about the direct tax collection growth rate, and said it can adversely affect the BE of Rs 11.5 trillion for the current financial year (FY19).

As such, successive governments have resorted to time-tested methods of rolling over additional subsidy burden, taking back unspent amounts from ministries, converting certain expenditure entries to ways and means advance, and running down the cash reserves.

As reported earlier, if these steps are not taken, the Centre could see additional expenditure of at least Rs 45,000 crore this year, over and above the budgeted spending estimates of Rs 24.4 trillion.

The demand for an interim dividend comes at a time when the issue of the RBI's excess capital has been a major bone of contention between North Block and Mint Road.

The RBI board has decided to set up a panel, headed by former RBI governor Bimal Jalan, which is expected to decide on how the central bank should provision for its capital reserves and whether it should transfer some portion of that to the government. 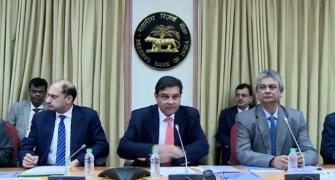 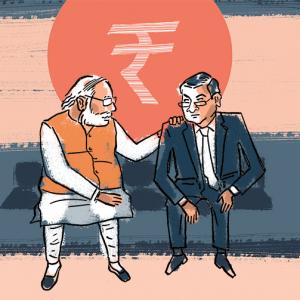