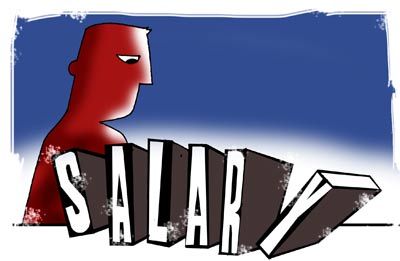 The government has withdrawn its order directing companies and commercial units to pay full wages to workers even when they are not in operation during the COVID-19-induced nationwide lockdown, which began on March 25.

The lockdown, imposed to prevent the spread of the novel coronavirus, entered its fourth phase on Monday.

The government's move is expected to bring relief to a large number of industries and companies which were unable to pay full wages to their employees.

While issuing guidelines for the lockdown's fourth phase, Union Home Secretary Ajay Bhalla's order on Sunday said, "Whereas, save as otherwise provided in the guidelines annexed to this order, all orders issued by National Executive Committee (NEC) under Section 10(2)(1) of the Disaster Management Act, 2005, shall cease to have effect from 18.05.2020."

Sunday's guidelines mentioned six sets of standard operating protocols, mostly related to movement of people, which will continue to remain in force.

But it does not include the March 29 order issued by the Union home secretary that directed all employers to pay wages to workers on due date without any deduction even if the commercial unit was closed during the lockdown period.

The March 29 order had said: ‘All employers, be it in the industry or in shops and commercial establishments, shall make payment of wages of their workers, at their workplaces, on the due date, without any deduction, for the period their establishments are under closure during the lockdown.’

Bhalla, while issuing the fourth phase's  guidelines, had said he, as chairperson of the NEC under the Disaster Management Act, 2005, ‘has issued orders on lockdown measures on March 24, March 29, April 14, April 15 and May 1 specifying various issues related to implementation of the lockdown and the exemptions given to various people and services from the curbs’.

Interestingly, the Supreme Court on May 15 had asked the central government not to take any coercive action for a week against companies and employers who are unable to pay full wages to their employees during the nationwide lockdown.

There may be small companies which are not earning and therefore unable to pay, the top court had observed.

A bench of justices L N Rao, S K Kaul and B R Gavai, hearing multiple petitions on the issue through video conferencing, observed that the ministry of home affairs \circular of March 29, directing companies to make payment of full wages to workers, was an omnibus order and there was a larger question involved which needs to be answered.

The top court issued notice on a plea by the Hand Tools Manufactures Association, comprising of MSMEs seeking quashing of the order asking private establishments to pay full wages to their workers during the lockdown.

Solicitor general Tushar Mehta, appearing for the Centre, said that he had a conference on the issue and needs to file a detailed response on the pleas.

The bench said there may be small industries which are affected due to the lockdown as they can sustain for say 15-odd days but not more and if they cannot earn, how are they going to pay their workers.

‘This is an omnibus order (March 29). There is a larger question involved and government has to find an answer to it,’ the bench observed and posted the matter for this week.

It added that if the government does not help these small companies, then they will not be able to pay to their workers.

Senior advocate Jamshed Cama, appearing for the association, said the companies are going out of work as they do not have orders for production of goods and they are being prosecuted due to the government circular.

He said the government must hold the hands of these companies and help them but they cannot be prosecuted.

The bench said there shall be no coercive action against any of these companies for failing to pay full wages to its employees till next week.

The Association of Micro, Small and Medium Enterprises (MSMEs) said in its plea that the ministry of home affairs had passed orders without due care and deliberation on the financial implications for employers.

The small industrial units warned that making full payments will lead to their closure which, in turn, will cause permanent unemployment and adversely affect the economy.

They have said that such a blanket direction for payment of full salaries was “arbitrary, unconstitutional and unsustainable”.