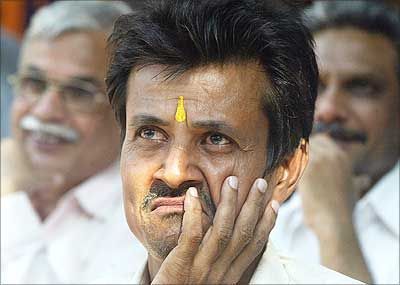 Stock markets tumbled on Wednesday with an estimated Rs 6 lakh crore getting wiped off from the invested wealth within seconds of opening trade as Sensex plunged 1,689 points on the US election trends showing lead for Donald Trump and the withdrawal of high-denomination notes worth billions.

The Rupee also lost value, but gold appeared to be a gainer as an investment option with sovereign gold bonds and gold-linked Exchange Traded Funds gaining ground as key non-cash instruments.

The Sensex opened sharply lower at 26251.38 points in the morning and moved further down within seconds to touch a low of 25902.45 points -- down 1,689 points from its previous close -- with all 30 stocks from the benchmark index trading deep in the red.

Buying at lower levels, however, helped the Sensex to recover some lost ground in late morning trade. It was down nearly 975 points at 1100 hours.

The overall investors' wealth, measured in terms of valuation of all listed stocks, was down by nearly Rs 6 lakh crore in early morning trade, from nearly Rs 111.44 lakh crore at the end of Tuesday’s trade.

The rupee turmoil continued as it slumped further by 28 paise to 66.90 against the US dollar in morning deals on the government's sudden action to ban on Rs 500 and Rs 1,000 currency notes in order to curb black money.

The domestic currency opened lower at 66.70 as against Tuesday’s closing level of 66.62 per dollar at the Interbank Foreign Exchange (Forex) market. Soon, it spiralled downward further and languished between 66.90 and 66.70 during morning deals. It was quoting 66.90 at 1045 hrs.

Meanwhile, the dollar index dropped by 2.06 per cent at 95.91 against a basket of six currencies in the early trade.