Asserting that India's dedication to climate commitments is evident from its performance, Prime Minister Narendra Modi on Monday hoped that rich countries of G-7 will support India's efforts in combating climate change and invited them to tap the huge market for clean energy technologies emerging in the country. 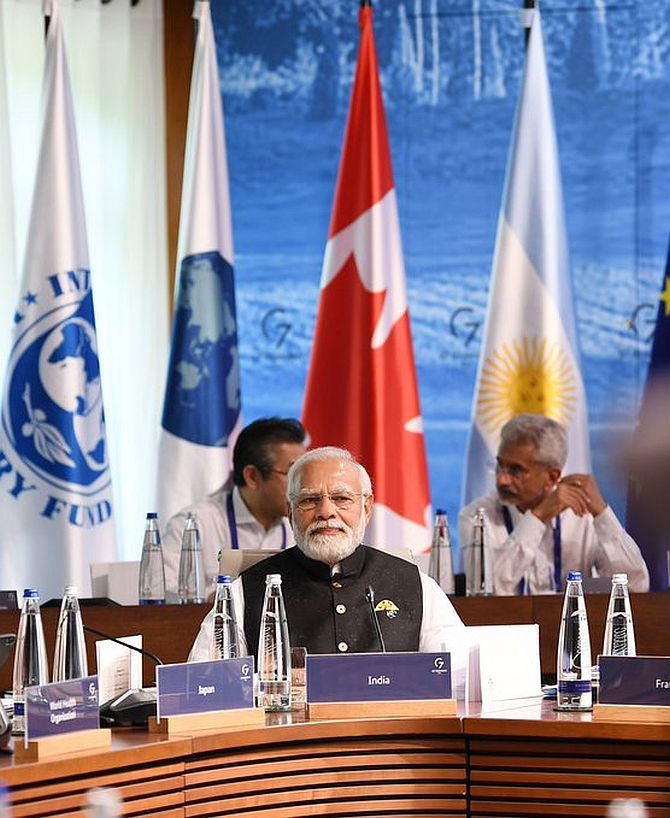 In his remarks at the session on ‘Investing in a better Future: Climate, Energy, Health' at G7 Summit, Modi highlighted India's track record and said it has achieved the target of 40 per cent energy-capacity from non-fossil sources nine years before time.

"The target of 10 per cent ethanol-blending in petrol has been achieved 5 months before time.

"India's huge railway system will become net zero in this decade," he said.

"When a large country like India shows such ambition, other developing countries also get inspiration.

"We hope that the rich countries of G-7 will support India's efforts. Today, a huge market for clean energy technologies is emerging in India," the prime minister said.

G-7 countries can invest in research, innovation, and manufacturing in this field, he said.

The scale that India can provide for every new technology can make that technology affordable for the whole world, he asserted.

The core theories of the circular economy have been an integral part of Indian culture and lifestyle, Modi said.

"I called for a movement called LIFE - Lifestyle for Environment - in Glasgow last year.

"This year on World Environment Day, we launched the Global Initiative for LiFE campaign.

"The goal of this campaign is to encourage an eco-friendly lifestyle," he said.

"We can call the followers of this movement Triple-P i.e. 'pro planet people', and we should all take the responsibility of increasing the number of Triple-P people in our own countries.

"This will be our greatest contribution to the coming generations," he said.

Modi, who is in Germany on a two-day visit from Sunday for the summit of the G7, was received by German Chancellor Olaf Scholz upon his arrival at Schloss Elmau, the picturesque venue of the summit in southern Germany.

Before the start of the summit, Prime Minister Modi shook hands with US President Joe Biden and Canadian Prime Minister Justin Trudeau as the leaders assembled for a group photo.

This was the first meeting between Modi and Biden after they met in Japan for the Quad summit in May.

The two leaders are also scheduled to meet in July for the I2U2 virtual summit of the quadrilateral economic forum comprising India, Israel, the UAE and the US.

The Group of Seven (G7) is an inter-governmental political grouping consisting of Canada, France, Germany, Italy, Japan, the UK and the US.

The German Presidency has invited Argentina, India, Indonesia, Senegal and South Africa to the G7 Summit in Elmau, Bavaria.

Modi is attending the G7 summit held in the Alpine castle of Schloss Elmau in southern Germany following an invitation by German Chancellor Scholz.