The 47th GST Council meeting that is currently underway is slated to discuss a host of issues, including a mechanism for compensating states for revenue loss, tax rate tweaks in some items and relaxed registration norms for small online suppliers. 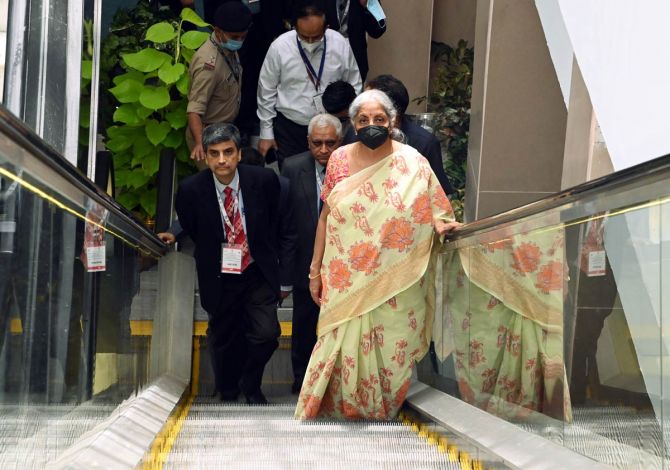 Further, the meeting of the Council, chaired by the Union Finance Minister Nirmala Sitharaman and comprising state counterparts, will also clear levying the highest tax of 28 per cent on online games, casinos and horse racing, besides, measures to curb tax evasion, especially devising ways to tackle high-risk taxpayers in GST.

"The meeting is being chaired by Hon'ble Union Minister of Finance @nsitharaman and many important decisions are expected to be taken at the meet," PIB Chandigarh tweeted.

"The two-day meeting of the GST Council is being attended by Union Minister of State for Finance Shri @mppchaudhary, besides Finance Ministers of States & UTs and Senior officers from Union Government & States," the Finance Ministry tweeted.

The GST Council would also consider a report of the panel of state ministers on making e-way bill mandatory for intra-state movement of gold/ precious stones worth Rs 2 lakh and above and e-invoicing mandatory for all taxpayers supplying gold/precious stones and having annual aggregate turnover above Rs 20 crore.

Besides, an interim report of a group of ministers on rate rationalisation, headed by Karnataka Chief Minister Basavaraj Bommai, which has suggested correcting the inverted duty structure and removing some items from exempted list, would also be taken up for consideration.

Separately, the report of the committee of state and central officers, commonly referred to as the Fitment Committee, which suggested tweaking rates in a handful of items and issuing clarification in case of majority of items would also be deliberated during this meeting.

The Council may see a stormy discussion around compensation payout to states with opposition-ruled states aggressively pushing for its continuation beyond the five-year period which ends in June.

The Centre, last week, notified extension of the compensation cess, levied on luxury and demerit goods, till March 2026 to repay borrowing that were done in 2020-21 and 2021-22 to compensate states for GST revenue loss.

GST was introduced from July 1, 2017, and states were assured of compensation for the revenue loss, till June 2022, arising on account of GST roll out.

As per a Reserve Bank study, the weighted average tax rate under GST has declined from 14.4 per cent at the time of its launch to 11.6 per cent in September 2019.

In order to meet the resource gap of the states due to short release of compensation, the Centre borrowed and released Rs 1.1 lakh crore in 2020-21 and Rs 1.59 lakh crore in 2021-22, as back-to-back loans to meet a part of the shortfall in cess collection.

The Council is also likely to relax compulsory registration norms for small businesses with annual turnover up to Rs 40 lakh and Rs 20 lakh for goods and services respectively, using e-commerce platforms to sell products.

Currently, suppliers supplying through e-commerce are required to take compulsory Goods and Services Tax (GST) registration. Also, businesses with a turnover of up to Rs 1.5 crore and making e-commerce supplies would be allowed to opt for the composition scheme, which offers a lower rate of tax and simpler compliance.

The changes would bring in parity between entities who are doing businesses through either online and offline mode under GST.

The report of a panel of state finance ministers has suggested verification after registration for high-risk taxpayers under GST, besides using verification of electricity bill details and bank accounts for identifying such taxpayers.