Based on the current momentum, the funds likely to be raised through the RBI's relaxed window would be $3.5 billion-$4 billion. 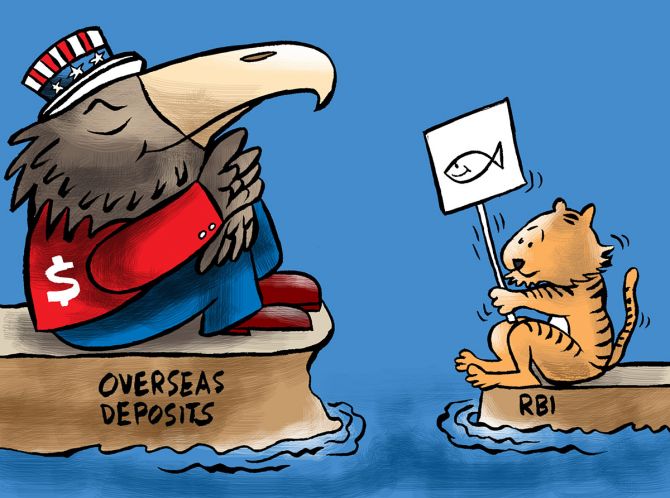 Almost two-and-a-half months after the Reserve Bank of India further liberalised the ways by which banks can tap overseas deposits, the measures have brought in $1.5 billion-$2 billion so far, according to sources.

However, this is far lower than the amount garnered in 2013, when the central bank had offered a special window for foreign currency deposits.

Sources said based on the current momentum, the funds likely to be raised through the RBI's relaxed window would be $3.5 billion-$4 billion.

About 40 per cent of the funds would be through foreign currency non-resident (banks), or FCNR (B), deposits and the rest through non-resident external (NRE) accounts, sources said.

In September 2013, when the RBI provided a special swap window, funds worth $26 billion flowed into FCNR (B) accounts in that financial year.

Bankers then said $6 billiion-$8 billion had flowed in within a couple of weeks of the RBI making the announcement.

On July 6 this year, the RBI announced a slew of steps to further liberalise foreign exchange flows as the increasing momentum in US rate hikes and overseas investment outflows had led to the rupee plummeting to new lows against the dollar.

The central bank provided a relaxation on maintaining the cash reserve ratio and statutory liquidity ratio on fresh FCNR (B) and NRE deposits.

The leeway, applicable till November 4, brings down the costs for banks raising such deposits.

The RBI also permitted banks the option of offering higher interest rates on FCNR (B) and NRE deposits with effect from July 7 till October 31, 2022.

While most banks have ramped up the rates offered on FCNR (B) and NRE deposits, the response has been subdued.

"On the FCNR and NRE side, there are some concessions, but they are not large. I don't think that would move the needle by much for any bank. They are not in the nature of what they did in 2013," Ashish Parthasarthy, treasurer, HDFC Bank, told Business Standard.

"In 2013, the RBI was acting as counterparty, so eventually it ensured that the landed cost of funds to banks, the rupee funds, were more or less aligned with the domestic costs. Then the RBI made it attractive for banks to go and source those funds," he said. The current scheme of things, however, is different.

While the RBI has provided relaxations, the external environment is much less conducive for banks from the point of view of their margins.

The key difference now is that the Federal Reserve has embarked on the most aggressive tightening cycle in almost two decades.

"We've recently increased our rates on FCNR deposits and aligned them in line with the market. Of course, the dollar interest rates themselves have gone up, which is also getting reflected," said Neeraj Gambhir, head of treasury, Axis Bank.

"The recent measures announced by the RBI may not be a game-changer in that sense. It is better enablement for banks to be able to attract flows but I don't think the market is yet conducive for us to get very large flows," he said.

In 2013, US interest rates were near-zero, whereas now, in the space of six months the Federal Reserve has hiked interest rates by 225 basis points (bps) and is seen raising them by at least 125 bps more.

Moreover, at that time, Indian interest rates were much higher than they are now, making it easier for lenders to offer lucrative rates to overseas depositors.