A break-up of business shows that 75% of a firm's turnover is led by volume growth, while 25% is price-led.
Companies such as Britannia, Nestlé, Dabur, Marico, Kellogg, Parle Products, and Hindustan Unilever have increasingly focused on smaller packs of their key products, aimed at improving sales. 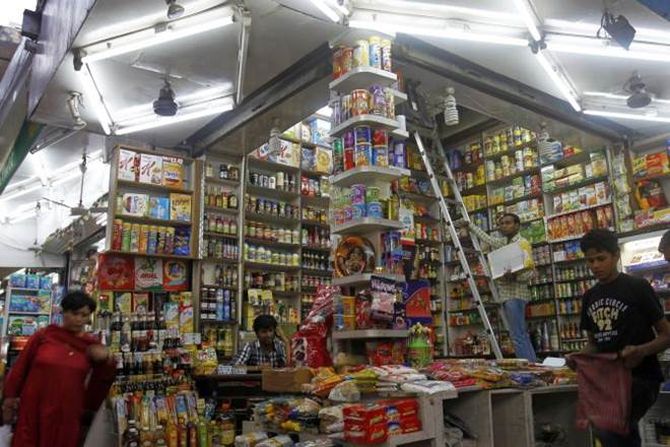 Premiumisation has been a strong and recurring theme for most fast-moving consumer goods (FMCGs) for a few years now.

The trend has seen companies roll out pricier products, aimed at tapping into the consumer’s need for a better lifestyle.

Firms have also insisted that this trend is here to stay and it will only grow.

However, a closer look at an FMCG company’s turnover today presents a different picture.

A break-up of turnover, according to Nielsen, shows that 75 per cent of an FMCG company’s sales is led by volume growth, while 25 per cent is price-led growth.

The research agency says two years ago the situation was different.

"In other words, the proportion of price-led growth was higher versus volume growth,” says Prasun Basu, president, South Asia, Nielsen.

“In the last one year following the implementation of the Goods and Services Tax (GST), there is a big shift towards volume growth from price growth,” he says.

This trend, he says, was not very pronounced earlier.

“Companies have realised that passing on gains gives them a much-needed volume edge. And consumers have tipped over and are buying more. Sales volume, therefore, has gone up significantly,” he says.

For the July-September period, for instance, the FMCG market, according to Nielsen, reported its highest growth rate in a year, at 16 per cent, led by 13 per cent volume growth.

Analysts say double-digit volume growth will continue in the December quarter too.

B Sumant, president, FMCG businesses, ITC, points to the growing massification of all categories for the shift towards volume growth.

“The question for most players is: How do we make products more affordable across categories including premium and niche?

"How do we go deep and create stackable value since capital, distribution and communication are no longer entry barriers to the business?

"If we don’t do this, local players will take the business away at the lower end and niche players will do so at the upper end of the market,” he says.

The debate prompted ITC to roll out Rs 10 price-point packs of its premium Dark Fantasy Choco Fills biscuits and refill packs of its handwash products in recent quarters.

Companies such as PepsiCo, for instance, have aggressively pushed Rs 5 and Rs 10 price-point packs of its snacks in the marketplace.

According to industry estimates, the proportion of low-unit packs (LUPs) in an FMCG company’s portfolio has increased from 10-15 per cent earlier to 20-25 per cent now.

The move, say experts, is also aimed at tapping the purchase wallet of rural consumers as companies increasingly make their way to the hinterlands in their quest for growth.

“Newer consumers are increasingly coming into the fold as incomes improve.

"And as companies go into rural areas, it becomes imperative for them to understand the needs of consumers there and target products that are tailor-made to those requirements,” says Abneesh Roy, senior vice-president, research, institutional equities, Edelweiss.

Higher sales growth reported by most FMCGs in the last few quarters, say analysts, is a result of this push into rural areas and of companies making an attempt to understand what works there.