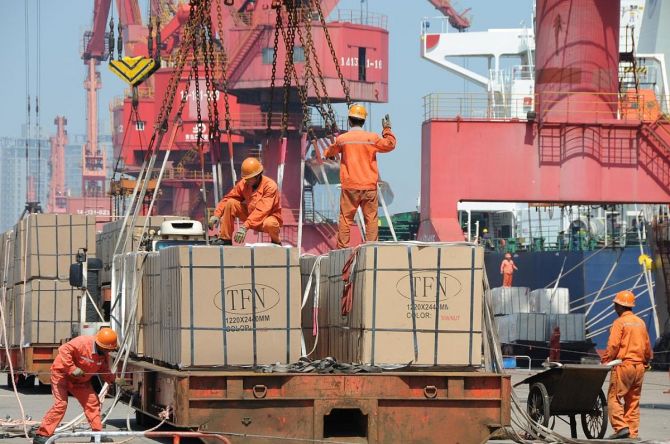 Contracting for the sixth straight month, India's exports slipped 12.66 per cent year-on-year to $22.7 billion in August, on account of fall in the shipments of petroleum, leather, engineering goods and gems and jewellery items, as per the government data released on Tuesday.

The country's imports too declined 26 per cent to $29.47 billion in August, leaving a trade deficit of $6.77 billion, compared to a shortfall of $13.86 billion in the same month last year, as per the data. The deficit (the difference between imports and exports) was $4.83 billion in July.

Gold imports jumped to $3.7 billion in August as against $1.36 billion in the same month last year.

Trade deficit during the period stood at $20.72 billion. 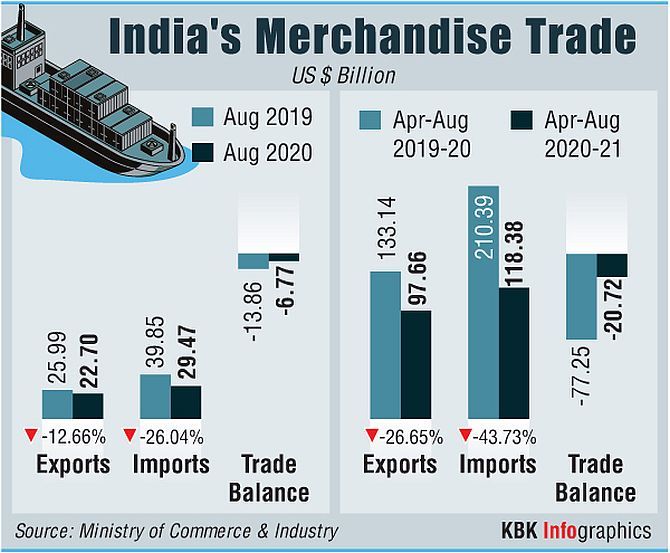 During the April-August period, oil imports dipped by 53.61 per cent to $26 billion.

Commenting on the numbers, Federation of Indian Exports Organisations (FIEO) president Sharad Kumar Saraf expressed concern on the dip in figures from labour-intensive sectors of exports, which directly or indirectly impacts employment generation in the country.

"There is a need to analyse imports as well, as such a steep decline in imports may hamper the industrial recovery in the coming months," he said.

Trade Promotion Council of India (TPCI) chairman Mohit Singla said that there was a 22 per cent growth in the processed food sector apart from sustained and robust buying on account of rice, cereals and oilseeds. 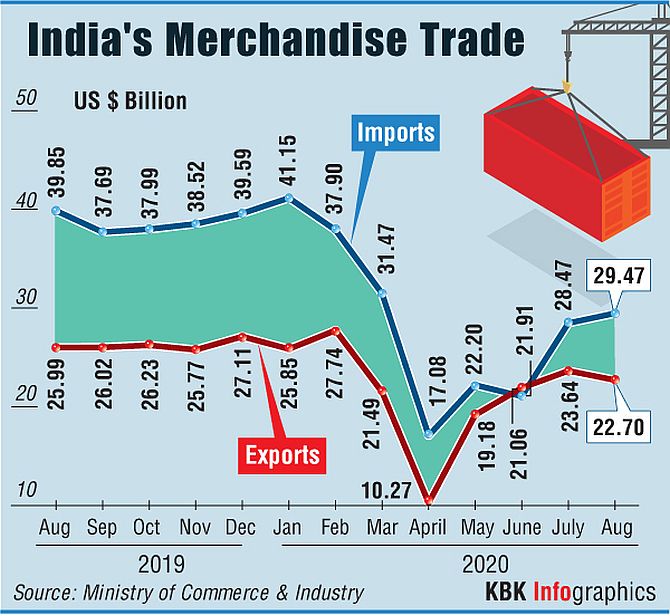 "Indian processed food industry is geared to witness an upward trend in future," he said.

Aditi Nayar, principal economist, Icra Ltd, said that "we expect the current account balance to post a surplus of $7-10 billion in Q2 FY2021".

India's service sector exports dipped by 10.76 per cent in July to $17.03 billion, the RBI data showed on Tuesday.

Services payments or imports in July too declined by 21.69 per cent to $10 billion.

Meanwhile, in a webinar Commerce and Industry Minister Piyush Goyal said exports during the second week of September (8-14) grew by 10.73 per cent to $6.88 billion.

".... but we have a lot of ground to make up on several sectors like textiles, gems and jewellery. But in an overall perspective, the mood is very positive amongst the industry," he said.

Imports during the period are down 22 per cent to $6.6 billion.

"So effectively, we are net exporter in the second week of September," the minister added.