With India's GDP clocking a lower contraction of 7.5 per cent in the September quarter, industry and experts expressed confidence of further recovery in the coming months and said the government's actions are bearing fruit. 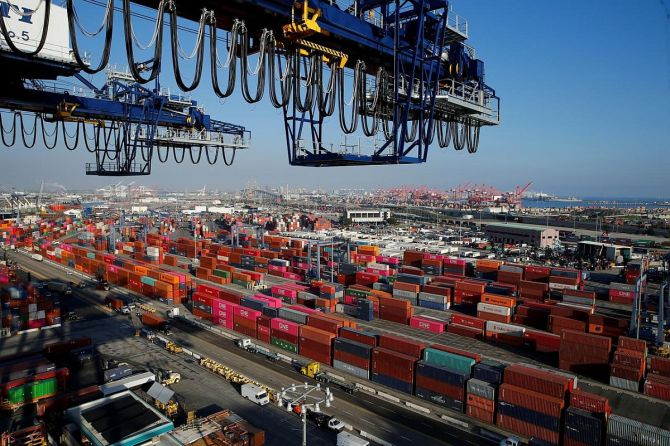 In a tweet, Vedanta chairman Anil Agarwal said, "Q2 #GDP numbers show that economy is recovering. Government's efforts on stimulus and reform are showing results. Hopefully, we will have positive growth in H2 FY21 and double digit growth in FY22."

CII director general Chandrajit Banerjee said, "the sharp rebound in the second quarter GDP print to -7.5 per cent as compared to the large unprecedented -23.5 per cent decline seen in the previous quarter will boost confidence that with the easing of lockdown restrictions over the past few months, there has been a discernible improvement in the economy."

He observed that the government action in terms of opening the economy has clearly been beneficial for growth.

"We are certain this trend would continue and the figures for the third quarter would be reflective of that.

Though private consumption seemed to be weak in Q2, all anecdotal evidence point towards a stronger consumption scenario in the next quarter.

"An increase in government spending would help this momentum for a more robust growth in the coming months," said Banerjee.

FICCI president Sangita Reddy said the GDP print has come in as a pleasant surprise.

"This is much better than what was anticipated by most analysts and clearly reflects that the Indian economy is on a sharp recovery mode.

“The positive, albeit marginal, growth noted in the manufacturing sector in the second quarter is truly encouraging," she added.

India's economy recovered faster than expected in the September quarter as a pick-up in manufacturing helped GDP clock a lower contraction of 7.5 per cent.

Manufacturing posted a surprise 0.6 per cent growth in July-September after it had shrunk by a massive 39 per cent in the preceding quarter.

Assocham Secretary General Deepak Sood said a decisive arrest of the slide from a steep contraction in the first quarter clearly shows a sharper recovery in India's economy which is braving the COVID-19 pandemic with strong resilience.

"Earlier estimates had apprehended around 10 per cent drop in Q2. The slide has been narrowed to 7.5 per cent, a situation much better than expected.

“Going forward, the second half of the current financial year should give us surprises on the positive side," Sood said.

He said several key high frequency indicators point towards further improvement, with the rural economy leading the rebound even as urban consumption is returning to shape.

PHDCCI president Sanjay Aggarwal said meaningful reforms undertaken the by the government since March 2020 have given the direction to the economy to come back on track.

Going ahead, the government's focus on demand-rejuvenating measures introduced under Aatmanirbhar Bharat 3.0 will have a multiplier effect on the economic growth trajectory through enhanced demand, job creation, increased private investments, escalated exports and growth of sectors that have strong backward and forward linkages, he added.

"It now remains to be seen whether this momentum is sustained in the remaining two quarters of FY21.

“We expect RBI to remain dovish and usher in at least one more rate cut of 25 bps in the near future," he added.

Rumki Majumdar, economist at Deloitte India, said the contraction in the first two quarters of this fiscal year is no surprise.

"Since the quarterly data of GDP is released with a lag of two months, we should look at these numbers in the rear-view mirror keeping in perspective that recent high-frequency data possibly suggest a quicker rebound ahead," Majumdar added.

B Gopkumar, MD and CEO, Axis Securities, said the growth outlook has improved with the Q2 GDP print, and now the market will look for sustainability of demand, especially after the festive season.

Sanjay Kumar, CEO and MD, Elior India, said the contraction in India GDP at (-) 7.5 per cent is amongst the worst as compared to its Asian peers.

This is definitely a cause of concern and hopefully, with the easing of the monetary policy, we can expect some further rebound in the coming quarter, he added.

"Going forward, however, we believe that the revival momentum in Q3/Q4 will be critically dependent on the pickup in private consumption during the festive season and a reduction in the intensity of the COVID pandemic.

"Any further resurgence of the pandemic and the delay in the introduction of the vaccines may constrain the expected GDP growth in Q3/Q4," said Suman Chowdhury, chief analytical officer, Acuite Ratings & Research.