At a pre-Budget meeting, the FM was asked to ensure that NBFCs come out of the liquidity crisis they are facing with the help of RBI.

They also spoke about the futility of trying to achieve a 3 per cent fiscal deficit target over the medium term. 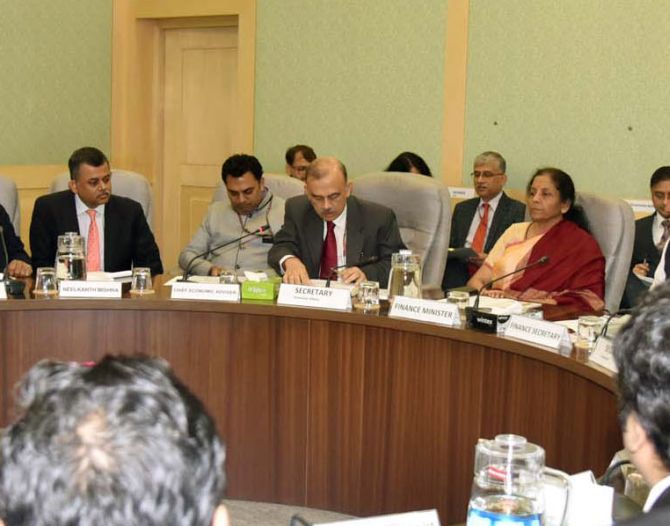 A number of economists on Friday advised Finance Minister (FM) Nirmala Sitharaman and her officials to focus on reviving economic growth and leave aside fiscal concerns for a while.

At a pre-Budget meeting, the FM was asked to ensure that non-banking financial companies (NBFCs) come out of the liquidity crisis they are facing with the help of Reserve Bank of India (RBI).

“Almost all economists present said fiscal expansion will be an inevitable consequence as the Centre needs to boost expenditure to revive the economy. Growth should be the priority,” said a person present at the meeting.

The economists also spoke about the futility of trying to achieve a 3 per cent fiscal deficit target over the medium term, something which has never been accomplished since the Fiscal Responsibility and Budget Management (FRBM) Act came into being.

According to the latest iteration of the FRBM Act, the Centre hopes to have a fiscal deficit for 2020-21 at 3 per cent of gross domestic product (GDP).

However, with the economic slowdown affecting tax revenues, fiscal deficit this year could be as high as 3.8 per cent.

The economists present also spoke about the need to rescue NBFCs.

“Some ideas which were suggested include a bad bank to take over the non-performing assets of NBFCs, or the RBI being a lender of last resort,” said the official.

The idea floated was that the RBI can provide liquidity support and buy out the toxic assets from NBFCs.

These assets will go into RBI’s books and there should be some arrangement with the government to liquidate them later, the person said.

The experts also said that agriculture reforms should be carried out as soon as possible, and that the Centre should ensure more disposable income in the hands of the rural population through schemes such as PM-KISAN and NREGA.

“The slowdown was discussed at length. Participants said that the Centre should remove policy uncertainty from certain sectors, like we are seeing now in the telecom sector,” the person said.

India’s GDP growth for the July-September quarter came in at a 26-quarter low of 4.5 per cent.

While the Centre is still hoping for a recovery in the second half of the year, other agencies don’t share its optimism, with even the RBI cutting its growth forecast for 2019-20 to 5 per cent from 6.1 per cent earlier.

Additionally, the economists also raised concerns about the fiscal situation of the states and poor resource mobilisation through goods and services tax (GST).

These points gain prominence against the backdrop of the Fifteenth Finance Commission submitting its first report for 2020-21 to the government.

The report is expected to touch these two points at length.

“The main focus areas of the discussions included steps needed to achieve $5-trillion economy, job-oriented growth with focus on manufacturing and services, transparency of fiscal arithmetic, monetary transmission, government’s fiscal prudence and fiscal stimulus, revival of NBFCs and inflation targeting among others,” said a press release after the meeting.

The economists at the meeting included Neelkanth Mishra of Credit Suisse, Rathin Roy of National Institute of Public Finance and Policy, Shekhar Shah of NCAER, former chief economic advisor Arvind Virmani, executive director for India on the board of the IMF Surjit Bhalla, Abheek Barua of HDFC Bank, Soumya Kanti Ghosh of State Bank of India and Ajit Ranade of Aditya Birla Group.