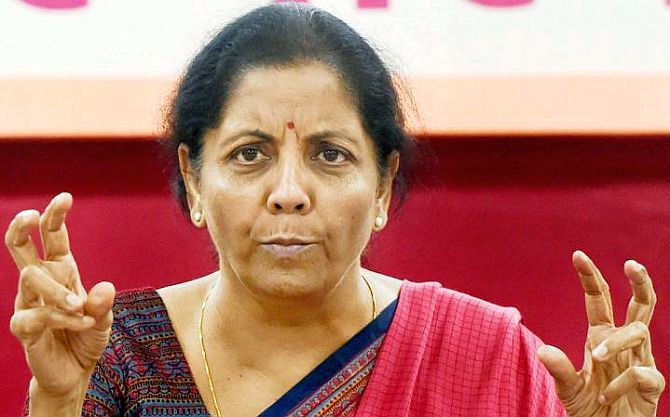 Finance Minister Nirmala Sitharaman on Wednesday asked taxmen to firmly deal with those who try to evade taxes and game the system, while at the same time act as facilitators to honest taxpayers.

While she stressed that taxpayers should treat tax payment as contribution towards nation building and not as a punishment, the minister asked three investigating wings of the revenue department to share information among themselves to nab evaders.

Addressing officers at the Income Tax Day celebration here, Sitharaman said that efforts should be made to increase the tax base from 8 crore currently as desired by Prime Minister Narendra Modi.

She also said that the direct tax collection target of Rs 13.35 lakh crore for 2019-20 set in Budget was achievable, as the tax department has doubled the collection in the last five years.

"...Those gaming the system are the ones you (taxmen) have to keep a watch on... data mining, big data usage are all instruments in your hand to understand where the wrongdoing is happening and I am with you if you are firm on those people. I am fully with you if you are really firm on gaming," she said.

She said the three enforcement wings of the revenue department -- the Income Tax, the Enforcement Directorate and Directorate of Revenue Intelligence -- should share the information about assessees base and profile of assessee for better coordination in an investigation.

"If only these three (wings) shared the information about an assessee, you would have no businesses but to send an electronic claim, money is going to reach you.

“The whole business is about trust with the person who is paying the tax, who is helping build the country, and you are facilitating the process.

“It should strictly be as simple as that.

"It's about having right information about people and better trust between you and assessee.

“And if only that kind of understanding exists between assessee and you, there is no need to put in extra effort to address issues of avoidance and evasion," Sitharaman said.

Explaining the rationale for higher taxes being imposed on individuals who earn more, the minister said tax is not collected as a punishment, but with the intent that those who earn a lot if they can contribute more towards nation building.

"We are not punishing those who are earning, we need tax because we want to have greater, better, ... income or resource distribution," she explained.

"The nation takes that tax more because we want to redistribute it for people who have not been so able to make that kind of an earning for themselves," she said further.

The larger principle of taxation is that the government is not here to bring in something which is going to be too much on the shoulder the rich, the minister said."Yes we need that money ... would you help us to redistribute some (higher earning) for those who are less fortunate. So if that broader spirit is understood, the income tax officers will not be looked at as: 'Oh my God, I don't want anybody from the department come near me'".

Following the increase, the effective income tax rate for individuals with a taxable income of Rs 2-5 crore will go up from 35.88 per cent to 39 per cent and for those above Rs 5 crore it would go up to 42.7 per cent.

Sitharaman also asked the tax officials to be sensitive, despite on a regular basis, dealing with people who are avoiding paying taxes and are gaming the system.

"If in the last five years, you could double, what we have given you this year is nothing at all.

“So somewhere between Rs 11.8 lakh crore to slightly over Rs 13 lakh crore is no big deal at all. You have not been given a big target...

“The target given to the direct taxation people is imminently achievable, we are all here to facilitate it and with that, next year we can all sit and have a higher target," she said.

Sitharaman also invoked Chanakya's Nitishastra as she equated tax officials to honey bees which extract nectar from flowers without hurting them.

She said that every morning she forwards grievances of taxpayers from her social media handle to the Revenue Secretary for corrective action, where required.

She said that while the department cannot be run solely on basis of social media feedback, the platform does help in understanding the opinion at the ground level.

"We need not be averse to it. It helps us tweak our functioning a little bit here and there," she said.