Weeks after a United Kingdom court ordered his extradition, former liquor baron Vijay Mallya, accused of defaulting on loans of over Rs 9,000 crore, received another blow as a Mumbai court declared him a “Fugitive Economic Offender”. 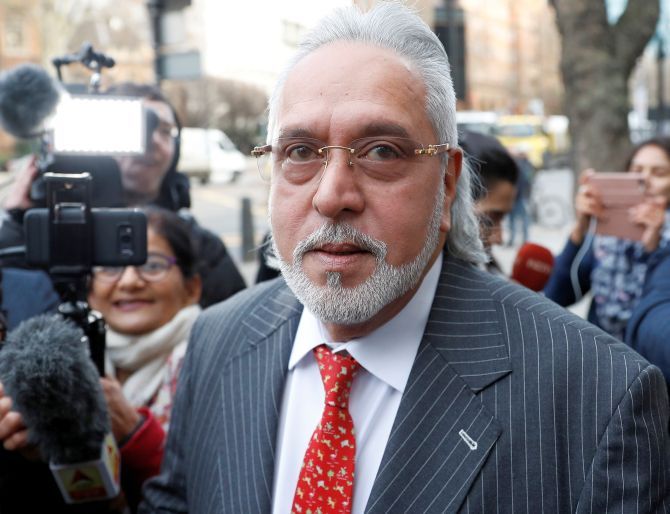 Mallya on Saturday became the first businessman to be declared an FEO under the Fugitive Economic Offenders Act which came into existence in August 2018.

The Enforcement Directorate had moved the special court for FEOA for this purpose.

The agency had requested the court that Mallya, currently in the United Kingdom, be declared a fugitive and his properties be confiscated and brought under the control of the Union government as provided under the act.

“The application of the ED is partly allowed. Vijay Mallya is declared as Fugitive Economic Offender under section 12 (i) of the FEO Act,” said judge M S Azmi in the order.

Hearing on the second part of ED’s plea -- confiscation of properties -- will start from February 5.

Mallya’s lawyers requested the court to stay the order for four weeks so that they could obtain its full copy and move the high court. The judge declined, saying a court under the FEO Act can not stay its own order.

The ED had argued that it made all possible efforts to bring Mallya back to India, but failed.

The extradition process in the UK court was a proof enough that he was not willing to return, ED counsel D N Singh had contended.

Even after the London court upheld Indian authorities’ plea for his extradition, Mallya decided to appeal against the order before the higher court there and refused to return, so he should be declared an FEO, Singh had argued.

Mallya’s lawyers contended that as he had surrendered before a magistrate’s court in London (during the hearing on his extradition case) and obtained bail, he could not be called a fugitive.

They had also questioned ED’s claim that he left India under suspicious circumstances, arguing that he had left to attend a meeting of World Motor Sports as the director of an F1 team (Force India).

Facing cases registered by the ED as well as the Central Bureau of Investigation, he is wanted for alleged fraud and money laundering amounting to an estimated Rs 9,000 crore.

Under the FEO Act, a person can be declared a Fugitive Economic Offender if a warrant has been issued against him for an offence involving an amount of Rs 100 crore or more and he has left the country and refuses to return.