The finance minister has emphasised on the quick disbursal of additional loans to MSMEs, to simplify process, formats and documentation. 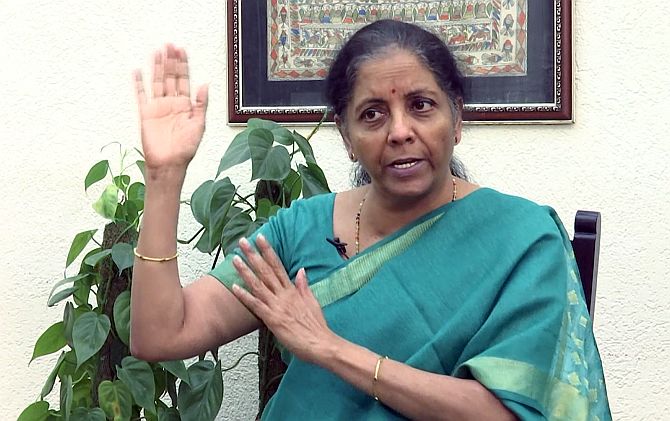 Finance Minister Nirmala Sitharaman on Friday held a review meeting with CEOs of public sector banks (PSBs) and asked them to implement the mega 'Aatmanirbhar' relief package to revive the COVID-hit economy.

The meeting via video conferencing took place in the backdrop of the Rs 21 lakh crore stimulus package announcement and the Reserve Bank coming out with fresh measures, including interest rate cuts.

The Union Cabinet headed by Prime Minister Narendra Modi on Wednesday gave its nod for many of the schemes announced as part of 'Aatmanirbhar Bharat Abhiyan' package to prop up the economy reeling under the COVID-19 crisis.

"Finance Minister Smt.@nsitharaman chairing the review meeting, through VC, with the chief executives of PSBs today to review the readiness of banks in implementing 'Aatmanirbhar' relief package," the finance ministry said in a tweet.

"To operationalise the announcements made by Hon'ble FM @nsitharaman ji under #AatmanirbharBharat, review meeting through VC was held with all PSBs. Everyone aligned on the need for quickly addressing the needs of MSMEs & other customers.

“Operational details to be released soon," the department of financial services, ministry of finance, said in a tweet.

The finance minister has emphasised on the quick disbursal of additional loans to MSMEs, to simplify process, formats and documentation, Indian Bank managing director Padmaja Chunduru said after the meeting.

Since the Union Cabinet has already given approval to various schemes announced under the package, operational guidelines have been issued to banks.

The most important among them is the Emergency Credit Line Guarantee Scheme (ECLGS) worth Rs 3-lakh crore for MSMEs hit hard by the coronavirus crisis.

The 100 per cent guarantee scheme at the concessional rate of 9.25 per cent was the second-biggest component of the Rs 20 lakh crore comprehensive package announced by Sitharaman last week.

Currently, the rate of interest on loans given by banks to the MSME sector varies from Rs 9.5 per cent to 17 per cent, depending on the risk perception.

The MSME sector is considered as the backbone of country's economy as the sector contributes over 28 per cent of the GDP and more than 40 per cent of exports, while creating employment for about 11 crore people, second highest after agriculture.

The scheme is expected to benefit 45 lakh MSME units.

Other scheme to help the stressed MSME sector also included Rs 20,000 crore subordinate debt for stressed or loan defaulting MSMEs, which could benefit 2 lakh such businesses.

A fund of funds for MSME is also being created, which will infuse Rs 50,000 crore equity in MSMEs with growth potential.

After the meeting, Central Bank of India managing director and CEO Pallav Mohapatra said the finance minister took stock of the situation and reviewed the progress of various schemes.

"All the banks are very-very optimistic about the schemes that have been announced in the recent past by the government to support the economy.

“State-run banks sanction in the COVID-19 period is more than the corresponding period last year, which was a normal year," he said.

"Loans worth over Rs 6.68 lakh crore were sanctioned by PSBs during March 1 - May 19 for 59.79 lakh accounts from MSME, Retail, Agriculture & Corporate sectors.

“A steady increase in credit availability for each of these vital sectors," the finance ministry had tweeted earlier in the day.

"Public Sector Banks sanctioned over Rs 1.07 lakh crore as emergency credit lines & working capital enhancements in the period March 20 to May 19, with Rs 25,527 crore of this amount already being availed by customers," it said.

Later, in an interview with DD News, the finance minister said the meeting with the public sector banks was "very good".

She commended the work done by the public sector banks for the implementation of the Rs 1.70 lakh crore PM Garib Kalyan Yojana, which was an announcement made within two days after the lockdown was announced.

"I must give credit to the public sector banks for having done a splendid job in implementing PM Garib Kalyan Yojana. So now with that same spirit this (Rs 20 lakh crore) package we have come up with, a partial guarantee, full guarantee for all enterprises... which banks will have to do. I was very reassured that the banks spoke in a very positive way," she said.

On the credit guarantee scheme, Mohapatra said the government's commitment is for the entire Rs 3 lakh crore.

"The commitment on the government under this Rs 3 lakh crore collateral free loans is 100 per cent.”

During deliberations, Indian Bank's Chunduru said, "Banks decided to focus also on Tier Ii and Tier III towns in all states to ensure needy MSMEs get the succour.

“CEOs of PSBs welcomed the Rs 3 lakh crore fully guaranteed loan component to MSMEs and assured the FM that all eligible units will get these loans promptly."

Central Bank's Mohapatra said, "Risk aversion, to a great extent, has gone. No actions are being taken for any commercial decision going wrong because of other reasons."

The meeting also took stock of interest rate transmission to borrowers by banks and progress on moratorium on loan repayments.

The RBI has increased the moratorium on loan repayment by another three months till August 2020 to provide relief to borrowers whose income has been hit due to the crisis.