Each scam that comes out in the open shows the regulators to be miles behind, notes Debashis Basu. 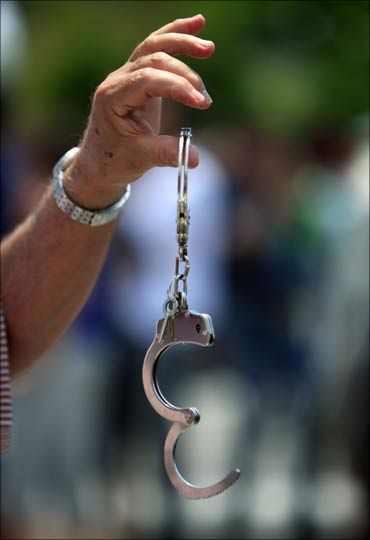 Even as the government is looking for a new chairman of the stock market regulator, Securities and Exchange Board of India (Sebi), it may like to know that everybody in Mumbai calls it a chairman-driven organisation - a euphemism for the fact that successive chairmen of Sebi have run it with personal discretion, instead of following consistent rules.

Is this what was expected of the liberalisation that started 23 years ago against the backdrop of the Harshad Mehta scam of 1992?

That scam symbolised most of the ills of the capital market then, accumulated over the previous decades: open outcry trading, physical record-keeping, money flowing from cash-rich public sector companies exploited by politicians to an opaque debt market and a cabal of adventurous domestic stockbrokers and foreign banks - all completely unregulated.

It was expected that Sebi would replace this with a transparent and a fair system that would protect investors' interests while developing the market.

In pursuit of this, the government not only set up Sebi, but also a set of professionally-run organisations, most of them funded by public money and driven by the profit motive. These organisations span stock exchanges, infrastructure companies, custodial services, depositories and credit information bureaus.

A few have become near-monopolies now. These were huge changes, which have attracted tens of billions of dollars. However, there is a difference between setting up institutions run by professionals and nurturing an institutional structure that can respond to new challenges and ensure accountability at all times. Has the latter happened?

For one, the regulators have been shockingly ham-handed in controlling malpractices and manipulation. This has been documented many times by this newspaper and other publications while covering various scams of the last two decades.

Two, all these new institutions - exchanges, depositories and credit bureaus - use complex technology and large databases but their regulators are out of depth in monitoring them.

These institutions, set up with public money have been kept unlisted; so, there are no public shareholders to ask questions either. As a result, many of them, function without an effective oversight or even fair competition. Therefore the questions to ask are:

If a regulated entity sets up a subsidiary or takes a questionable stake in another company, how are these investments monitored by the regulator?

In a highly complex and technology-intensive environment, data is completely under the control of the institutions. If the management of these companies refuse to share the correct data or submit doctored data, how would the regulator know?

Each scam that comes out in the open shows the regulators to be miles behind. This would be especially true of technology-driven scams. Even when the media or whistle-blowers point out wrongdoing, the regulator either lacks expertise or is too compromised to act.

In some cases, there is no oversight at all. What I am suggesting does not amount to crying wolf because of multiple past incidents. I will cite only two.

In 2006, an income-tax investigation stumbled on a multiple-application scam that took place a couple of years earlier.

Shockingly, National Securities Depository Limited (NSDL)'s vaunted systems failed to detect something quite simple: applicants to initial public offerings (IPOs) had brazenly consolidated thousands of allotments into a few depository accounts before the shares of a manipulated IPOs were listed. C B Bhave was then the managing director of NSDL.

Sebi ordered an investigation. Even as that was pending, Mr Bhave was appointed chairman of Sebi itself! Earlier, in 2001, there was another scam that breached NSDL's database.

The second case involved Stockholding Corporation of India Ltd (SHCIL). Despite a severe indictment by the joint parliamentary committee in the Ketan Parekh scam, SHCIL had been allowed to retain senior managers implicated in the scam.

In 2006-07, it had created several subsidiaries, whose shareholding has been parcelled off to private entities keeping its public sector shareholders in the dark. SHCIL's wholly owned subsidiary even set up competing businesses and an overseas subsidiary in Singapore to siphon off half the profit from the proposed e-stamping business.

Clearly, liberalisation is not a one-time effort. It needs regular maintenance. We should have had continuously updated checks and balances so that transparency, accountability and fair play, sorely missing in the pre-liberalisation era, remained the cornerstone of systemic change.

Getting the right Sebi chairman would be only the first step towards fixing this. Creating a special focus on how technology-intensive regulated entities can fool us is the next step.

The writer is the editor of www.moneylife.in.