Paramount Airlines had started its operations in 2005 and was flying to southern and eastern parts of India before it wound up 2010. 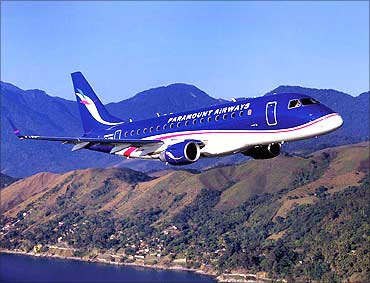 The Central Bureau of Investigation on Thursday registered a case of forgery and cheating against the promoter of Paramount Airways M Thiagarajan for allegedly defrauding and diverting loan taken from banks to his off shore accounts.

After registering the case with the designated CBI court, the agency sleuths carried out searches at seven locations in Chennai and Madurai including the office and residence of Thiagarajan.

In the FIR registered under various sections of Indian Penal Code relating to cheating and forgery, the CBI alleged that the promoter of the airlines had disposed of or sold hypothecated movable and fixed assets without the knowledge or permission of the banks which had extended credit to the company against those.

The CBI alleged that the proceeds were thereafter misappropriated by the promoters of the company.

CBI claimed that Thiagarajan and his company "regularly siphoned off large amounts of money by transferring the same to the accounts of offshore firms incorporated abroad and showing the same as payment towards Lease Rental-Engine access" between April 2008 and October 2010.

It is also alleged that the accused "induced" the Director General Civil Aviation to issue No-Objection Certificate for scheduled operators permit by submitting false and fabricated information about the eligibility criteria.

The CBI alleged that the accused had also opened an off shore account in British Virgin Island in the name of a company which was headquartered in Singapore to which he diverted the money received as loans from SBI, Andhra Bank, Indian Overseas Bank and Bank of India between April 2008 and October 2010.

When contacted, Thiagarajan told PTI that the allegations levelled by the CBI were "absurd" and that his company would come out clean.

Paramount Airlines had started its operations in 2005 and was flying to southern and eastern parts of India before it wound up 2010.

The company had submitted a plan to re-start operations with six ATR aircraft in 2013 but the banks wrote to the DGCA asking the aviation regulator not to allow the carrier to re-launch its services before clearing the dues.