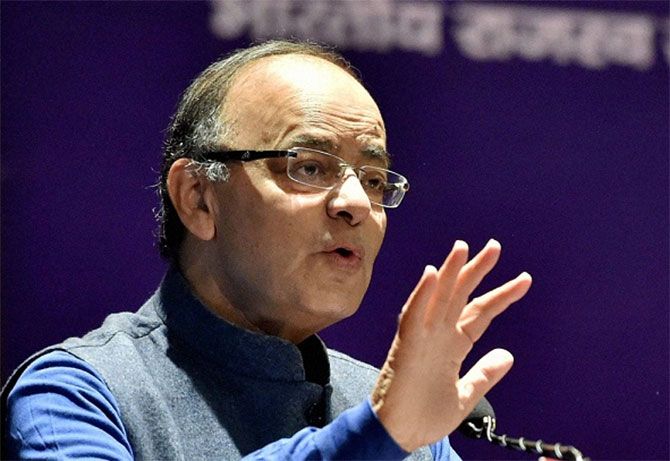 Finance Minister Arun Jaitley hinted, on Tuesday, at lower direct and indirect tax rates in the future as demonetisation results in higher tax revenues from unaccounted wealth coming into system.

He also warned of a "very heavy price" that unscrupulous elements will have to pay for amassing large amounts of cash unlawfully, saying agencies are keeping a close eye on cash accumulations.

The November 8 announcement by the government to demonetise high value notes has in one stroke junked 86 per cent of the currency in circulation and holders of the discontinued notes can deposit them in banks before the end of the year and withdraw money in new currency.

The money being deposited has to be accounted for and taxes paid - 50 per cent on voluntary disclosures of unaccounted money and 85 per cent for any failures.

"So much money...operating as loose cash in the system has today come into the banking system," he said. "It has to be accounted for. Where taxes have not been paid will now be recovered."

Jaitley said future transactions would be substantially digital as India moves towards a less-cash society.

"Once they are substantially digital they get caught in tax net," he said. "Therefore the future taxation level would be much higher than what is currently being collected. This would also enable the government at some stage to make taxes more reasonable which will apply to both direct and indirect taxes."

Demonetisation together with other reforms, particularly the GST and the restrictions on cash spending subjected to PAN declaration, will bring down the levels of corruption in society, he said.

Jaitley said it has come to the notice of the government that some unscrupulous people, including some in the banking system and others, have been trying to subvert the system once again and have accumulated large amount of cash unlawfully.

"Obviously there is a breach of law in this and this is a step which hurts the economy. And therefore all agencies have an eye on this. They will investigate this matter and all those who are indulging in this malpractices will have to pay a very heavy price for what they are doing," he added.