In 5 years, the AMC has clocked a growth rate of 40% with its AUM up nearly 4 times.
Ashley Coutinho reports. 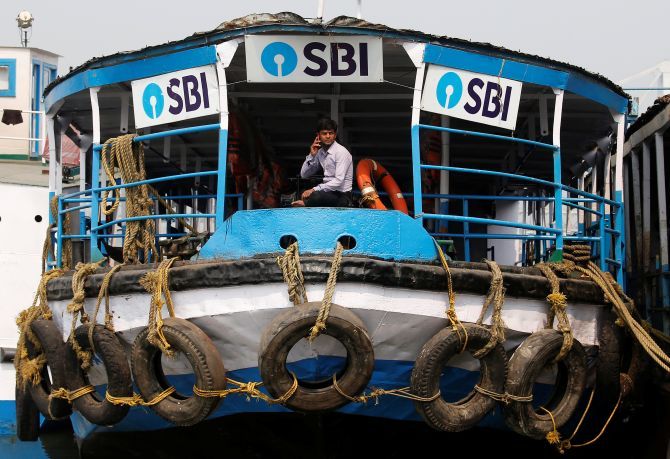 SBI Mutual Fund has had its share of ups and downs during its nearly 32 years of existence.

As the second fund house to set up shop after UTI in 1987, the fund house enjoyed a dream run between 1987 and 1994 piggybacking on the performance of its closed-ended schemes.

The entry of private sector players in 1994, however, spoiled the party of public sector-sponsored asset management companies (AMCs), including SBI MF.

Unlike other public sector peers which lost their way, SBI MF was back on its feet a few years later and enjoyed a good run in the early to mid-2000s as the equity market picked up steam.

The fund house found itself in rough weather in the aftermath of the financial crisis as performance started to slip and internal attrition began to bite.

All of which prompted the fund house to rejig its processes and take steps to foster greater transparency.

Navneet Munot was roped in as the chief investment officer in December 2008 and a new investment team was put in place.

There have been no major wobbles since.

In the past five years, the AMC has clocked a growth rate of 40%, with its AUM up nearly 4 times.

It moved up two places to number three last year, helped by the surge in debt inflows, steady performance across schemes and the money from the Employees Provident Fund Organisation, a mandate it got in mid-2015.

Managing Director and CEO Ashwani Bhatia, who took charge last year, attributes the AMC's steady climb to the robust systems and processes the fund house has put in place.

"We are competing with the best of the private sector. Our products are good and we have earned the trust of customers," says Bhatia.

Does SBI MF have what it takes to bag the top spot?

"The AMC has worked on bringing in experienced people and creating a conducive corporate culture. This has translated into greater consistency in the process plied across the fund house," says Kaustubh Belapurkar, director of fund research, Morningstar Investment Adviser India.

Barring a few top officials, most of the talent is recruited from outside the bank.

It may not be one of the best paymasters in the industry, but the fund house has an incentive structure for managers and began doling out employee stock option plans two years ago.

"Within the group we are the only company to give stock options. Our attrition rates are low and it's our culture that makes people stay," says Bhatia.

Key personnel such as the chief investment officer, head of equity and head of fixed income have been with the fund house for over a decade.

While the AMC may not have entirely shed its public sector culture, it is more attuned to market realities.

Sources say the fund has spent a tidy sum in increasing its digital marketing prowess and improving its reach through social media.

"We have used the public sector image as a strength. First time investors, in particular, have a lot of trust in the brand equity," says Executive Director and Chief Marketing Officer D P Singh. 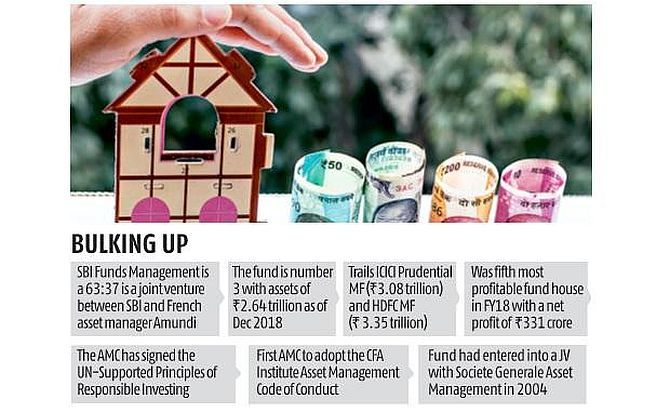 SBI MF has built up a decent track record in some of its equity and equity-oriented schemes.

"SBI's equity funds have largely been in the top two quartile in terms of performance but can be volatile," says Vidya Bala, head-MF research, FundsIndia.

"Their investment management team is not exceptional and their approach is conservative. It's like going to an SBI bank branch; even five years later their style of functioning will remain more or less the same," observes an industry official.

"But, in investment, consistency always pays."

Some market participants, however, believe that SBI's equity performance has rotated and the schemes have not performed well across cycles.

SBI Bluechip, one of their flagship funds, for instance, is now lagging and has underperformed its benchmarks over a one-year and three-year period, data from Morningstar shows.

"They have a fairly momentum-led portfolio, which is quite volatile. But the brand association with SBI does give a perception of stability which, according to me, is not the case," says a wealth manager, requesting anonymity.

SBI MF has beefed up its credit research team in the past few years and has built a mechanism for credit approvals and limits sanctioning.

"We conduct our own credit research and focus on risk-adjusted returns instead of chasing absolute returns. Our conservative stance on credit has kept us in good stead over the years;" says Chief Investment Officer Munot.

The ensuing risk aversion, however, has benefited a few AMCs such as SBI Mutual Fund, whose debt schemes are perceived to be safer than many other fund houses.

"With the debt crisis unfolding, SBI MF is expected to be one of the biggest beneficiaries of this trend. I wouldn't be surprised if the fund house reaches number two this year," says the wealth manager quoted above.

The AMC bucked the trend of de-growth in debt assets seen by most industry players last year.

The AMC has not adequately leveraged its army of distributors.

The general perception is that the AMC mostly piggybacks on its parent State Bank of India to sell its schemes.

In FY18, SBI earned the most in commissions after NJ Indiainvest and HDFC Bank, pocketing nearly Rs 558 crore (Rs 5.58 billion).

SBI MF, for its part, insists that it does not rely solely on its proprietary channel for distribution and is reaching out to national distributors and independent financial advisers as well.

The parent distribution channel contributes just about 20% of its MF sales, says Singh.

Critics point out that the asset manager's growth minus the EPFO assets do not look as impressive.

To be fair, SBI MF is not the only top fund house handling government money.

That said, the dependence on EPFO money could be perceived as negative, especially if the AMC sees an asset erosion in its flagship SBI Bluechip Fund or SBI Equity Hybrid Fund, schemes with assets in excess of Rs 20,000 crore (Rs 200 billion) each.

Industry observers feel it is time that SBI MF highlights the performance of its fund managers other than CIO Munot.

"Now that you are a top 3 player, the market would like to know your bench strength. Who are the other people driving fund performance?" says Amol Joshi, founder, PlanRupee Investment Services.

SBI MF says the fund is working closely with its joint venture partner Amundi, and its overseas assets has doubled in the past two years to about $2 billion.

With an initial public offering somewhere in the horizon, the intent to scale up is there.

"The IPO is some time away, may be a couple of years. We would like to keep growing so that we can bring more value to the current promoters," says Bhatia.

The AMC would do well to use that time to address its present shortcomings.